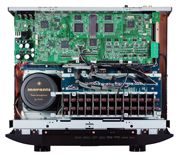 Now available in the UK are two new Marantz AV processors and a seven channel power amplifier designed for use in high-end home cinema systems.

First previewed at last summer's D+M conference in Spain, the AV7701 preamp/processor has seven HDMI inputs and three outputs, all of which are 4K and 3D compatible, allowing the use of two displays in one zone – for example to enable a TV and projector to be run – plus Zone 2 output of a separate source.

Multichannel analogue inputs are also provided alongside multiple analogue video inputs, audio inputs (including a moving magnet phono stage) and digital connections, and there are 7.2-channel analogue audio outputs on both conventional RCA sockets and balanced XLRs, with the option of configuring the output to deliver additional front height or width channels, or biamplify the front left and right speakers.

Video processing includes 4K passthrough along with the ability to up convert both standard definition and HD content to 4K 3840x2160-pixel resolution, and the AV7701 also has a new GUI menu system for ease of set-up and adjustment.

Automatic set-up is provided via Audyssey's MultEQ XT (Pro) room correction, and the processor also has Audyssey's Dynamic Volume, Dynamic EQ and DSX, the last of these allowing the creation of those extra height or width channels.

As well as network streaming capability, internet radio, Spotify and last.fm, the AV7701 also has Apple AirPlay and Bluetooth connectivity for smartphones, tablets and the like, and a front-panel USB port. Marantz M-DAX processing is included to make the most of compressed music.

The processor can handle streamed music up to 192kHz/24-bit FLAC, and offers gapless playback.

The AV8801 (above), which takes its place as the flagship Marantz processor, offers similar facilities to the AV7701, but adds 11.2-channel capability, along with Audyssey MultEQ XT32 Pro, Audyssey Sub EQ HT Dual subwoofer EQ processing and Audyssey LFC.

Like the AV7701, the AV8801 uses Marantz design features such as Current Feedback circuitry, copper-plated chassis and the company's Hyper-Dynamic Amplifier Modules, and can be controlled using the Marantz Remote App on tablets and smartphones.

The MM8077 power amplifier delivers 7x150W into 8ohms or 7x180W into 6ohms, and along with high-quality input and output terminals, has trigger and remote control inputs and outputs, allowing it to be hidden away in custom installations if required.

In addition there's the option to choose between balanced XLR and RCA inputs for each channel.

All three products will be in the shops by the end of this month.