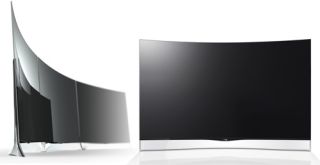 Curved OLED TVs from LG and Samsung have gone on sale in the US, the first mass-market OLED TVs to go on sale in America.

Having both announced 'world first curved OLED TVs' at CES at the start of the year, the LG 55EA9800 Curved OLED TV became available for pre-order in Korea earlier this year, and is now available through Best Buy in the US for a cool $15,000.

The Samsung KN55S9 is also due to go on sale in the US, reports Cnet, going on sale with – surprise – the same price tag, somewhat ironically via the Value Electronics dealer.

Earlier this year, Korean press reports suggested Samsung would focus on Ultra HD 4K TVs rather than OLED TVs due to higher than expected interest in the four times HD resolution TVs.

There's no sign of curved OLED TVs in the UK as yet, but you can put your cash down for the LG 55EM970V OLED TV should you have £10k and the phone number for Harrods. Originally due to ship this month, we can only presume confirmation of shipping will be forthcoming any day.

DisplaySearch reports global OLED TV demand is expected to hit 7 million units by 2016, while LG confirmed back in April it had sold 200 OLED TVs to date.

"We are fully committed to bringing next generation technologies to the global market," said Havis Kwon, President and CEO of LG Electronics’ Home Entertainment Company.

"The next-generation display technology and the advanced ultra-thin curved design in the LG Curved OLED TV represents a new era in home entertainment. It must be seen to be believed."

See for yourself in our LG Curved OLED TV video from CES earlier this year.