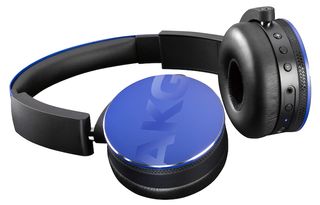 Following the success of the Y50s, we suppose it was only a matter of time until AKG released a Bluetooth version of these excellent headphones. And now we have a wireless model.

Available in blue, black or silver, and specially coated "for a hybrid matte glossy look", the Y50BTs use drivers similar to those found in the Award-winning model but also feature wireless playback.

AKG claims the internal battery should be good for at least 20 hours of playback. You can also answer calls and control your portable music player using buttons mounted on the left ear cup.

The headphones charge via micro USB, but there's always the option of using them passively if you happen to run out of juice - the Y50BTs are supplied with a 3.5mm headphone cable in the box.

Stay tuned to What Hi-Fi? for an exclusive review very soon...