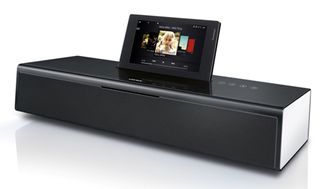 Looks like a soundbar with an iPad on top, doesn't it? But it isn't - this is Loewe's new SoundVision, an all-in-one music system that can handle CDs, iPod (but not iPad) docking, internet and FM radio, and music streaming.

That iPad-a-like perched on top is actually a fixed, 7.5in touchscreen display, which you can use to browse/control all your content – which can also be done via a remote handset, if you prefer. The display's interface is user-customisable.

The Loewe SoundVision incorporates six speakers – two of them subwoofers – and is launched with the bold claim of offering "the best sound and design quality worldwide from an all-in-one audio system".

As with the other new Loewe products launched here at IFA today – from Apple AirPlay speakers to home cinema systems – the SoundVision will come in a choice of 250 colours to suit.

The Loewe SoundVision will launch before Christmas, priced around £1250. We hope to review it soon.