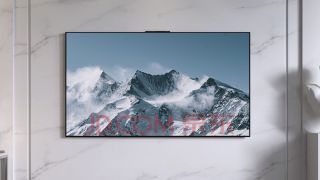 The good news is Huawei's first ever OLED TV is now available for pre-order. The bad news is that it's only available in China, for now at least.

It's not the Chinese smartphone maker's first bite of the TV cherry, though. Last year it took the wraps off the Huawei Vision, a 4K TV that used Quantum Dot technology.

The OLED set has arrived on the website of Chinese retailer JD.com, complete with specs and pricing (245000 Chinese Yuan, or £2850/$3500). Huawei's Smart TV X65 is said to support HDR and features a 24MP pop-up ultra-wide camera for video calls.

Like the Vision, this new 65-inch OLED TV appears to be no slouch when it comes to specs. It's said to boast a 120Hz refresh rate and 1,000 nits peak brightness. Apparently the TV will come pre-loaded with Huawei's proprietary Hongmeng OS, while the quirky pop-up camera will be able to recognise gestures, meaning that controls can be triggered with the wave of a hand. It also appears to come with 128GB of storage.

Huawei's first OLED seems to be serious about audio, too. It looks like the set has a 14 speaker array with a combined output of 75W. Word is you'll be able to calibrate the sound based on the amount of space and layout of furniture in your room.

Launching its first OLED TV in the current climate is certainly a bold move, especially with the likes of Sony, LG, Philips and Panasonic already in the space with their own OLED options. And, there's also Samsung and its strong range of QLED TVs. Hopefully, it will arrive in other territories in the not too distant future.