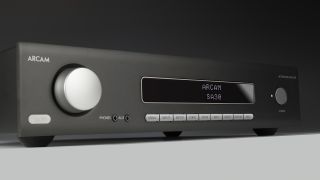 Arcam has announced its new flagship integrated amplifier from its HDA product range, the SA30.

Packed with features, including AirPlay 2 compatibility and state-of-the-art room correction technology Dirac Live, the company’s new amp will be on show at the High End show in Munich this week.

Driven by Class G amplification – 120W per channel into 8ohms and 220W into 4ohms – the SA30 aims to blend low-level detail with power by initially using Class A amplification with a single power supply, before utilising an additional supply to drive larger sections of the waveform.

Inside is a 32-bit supporting ESS Sabre ESS9038 high-end DAC, through which customers will be able to feed a volley of sources both old and new.

Among the SA30’s five analogue inputs is a switchable MM/MC phono stage, catering for turntables of all stripes, while a further four digital connections complete the array.

AirPlay 2 and Chromecast are also catered for, with Roon Endpoint status and MQA support ensuring the SA30 is capable of decoding the highest possible quality digital files. The HDMI ARC function, meanwhile, equips this Arcam amp to function as part of a home cinema set-up as well as in a tradition hi-fi system.

“The SA30 represents the new pinnacle for stereo amplification from ARCAM,” says Scott Campbell, Arcam’s Director of Sales and Marketing. “Our hugely talented design team has left nothing on the pitch here. This is Class G technology expertly implemented and teamed with the latest cutting-edge features, including room correction technology, high-resolution audio support, and custom install provision. I applaud their skills.”

The SA30 is scheduled to go on sale in the UK this autumn, with pricing announced at some point in the meantime.