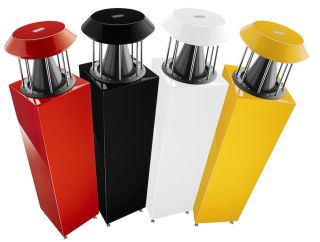 It's a month until the Munich High End Show, one of the highlights of the hi-fi calendar, and two new speaker models from German Physiks will make their debut there.

First up is the HRS-130 with prices starting at £11,990/pair. This model features the company's proprietary omnidirectional wide-band DDD driver in an octagonal cross-section cabinet, with a 10in downward-firing woofer in the base.

The newly-designed crossover is carried over from the form's Borderland Mk IV speakers.

German Physiks says the DDD driver uses pistonic, bending wave and modal radiation and it covers the range from 200Hz to 24kHz, so there is no crossover in the midrange "yielding a major improvement in clarity".

Standard finishes for the German Physiks HRS-130 are gloss black or white polyester.

Also making their Munich debut will be a luxury version of the firm's Unlimited MkII speakers (pictured), to be given the 'Ultimate' moniker. They will cost from £8900/pair and will be available in a high-polish polyester finish in black, white, yellow or red.

During the show renowned German pianist and composer Martin Vatter will give a number of presentations in the German Physiks room, talking about what has influenced his purist style of recording, as well as playing tracks from his extensive repertoire.

The Munich High End Show takes place at the MOC exhibition centre from May 14th-17th. Further details are available on the show's website.