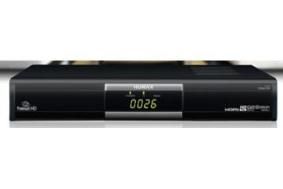 Always true to our word, here's our verdict on the first HD Freesat box to go on sale in the UK. We had a couple of snags with the first review sample we received, but the second one worked without a hitch.

For
Small and affordable; simple and pleasant to use; enjoyable HD images

Verdict
Currently number one in a field of one, the Humax does enough to makes us look forward to the rolling out of new HD broadcasts

We've already covered Freesat extensively in the magazine, so now it's time to get down to hardware specifics. And at the time of writing, the specifics are specific to the FOXSAT-HD. Humax got out of the blocks quickest, and the FOXSAT-HD is the first Freesat box (high-def or otherwise) to make it into our testing rooms.

As an ambassador of a concept that's made headlines in the national press lately, the Humax is unassuming to the point of anonymity.

An unexpectedly small box, with a simple-minded display and an unremarkable remote control, the FOXSAT-HD certainly doesn't look the sort of product that's going to revolutionise the way you do anything.

Mind you, if you live in an area that's gone without Freeview all this time, the Humax is probably the best-looking piece of kit you've seen in a while.

Works happily with a Sky dish

Thanks to its neat, straightforward menus, the Humax can be set up in next to no time. Plenty of users will need a dish installing by their retailers, but as we've already got a Sky TV dish we thought we'd give it a try – and our FOXSAT-HD box happily picked up a signal that way.

After a little argument about whether we knew our own postcode or not, the Humax sought out a total of 80 TV and radio stations without fuss.

The vast majority of Freesat content currently available will be familiar to anyone with a Freeview box, and the picture quality the Humax delivers won't startle too many viewers either.

Standard-definition broadcasts via the FOXSAT-HD are colourful, high-contrast affairs, with an all-pervading softness to textures (skin-tones especially) and a corresponding lack of fine detail.

Motion is handled reasonably strictly, except in the most testing circumstances when it can lose a little definition.

Its big trick is receiving high-def broadcasts, of course, and if you've been used to standard definition viewing then the BBC's HD-preview channel looks sensational.

BBC HD looks sensational
Compared to any standard-def broadcasts, BBC HD looks crisp, detailed and stable via the Humax. Movement is tracked keenly, tricky edges are convincing and the level of fine detail is impressive.

Although BBC HD is the only high-def channel available on Freesat right now, ITV HD is due to come on stream in time for this summer's European Championships, with a full HD line-up later this year.

Sound, whether from standard- or high-definition broadcast, errs on the side of thin and weedy. It's not definitively the worst we've heard, but the lack of weight at the low end and the eagerness to spill into sibilance at the top makes it a bit of trial compared to more accomplished Freeview boxes.

And if you want surround sound, Dolby Digital 5.1 soundtracks can be sent to a multichannel amp or receiver via the optical digital output.

So if your lack of Freeview reception has made you wary of the big analogue switch-off, never fear. There will be plenty of products that can do a digital job for you and, if the Humax FOXSAT-HD is anything to go by, they'll be capable and inexpensive.