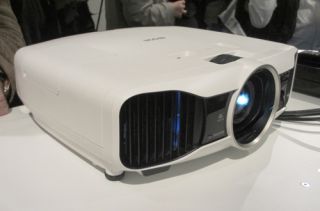 Epson's 2014 projectors are here. Initially unveiled in Berlin at IFA 2013, the five new models have now made their UK debut.

There are two new portable models available immediately, and three home cinema units released set for release in November, with prices from £549 to £3000.

First up is an HD-ready portable projector. The EH-TW490 features vertical and horizontal correction of up to 30 degrees and a 3-year or 2000-hour lamp warranty. This is the smallest of the lot, and designed to be set up (almost) anywhere. It is available for £549, and is available now.

Manual horizontal and automatic vertical keystone correction up to 30 degrees

Next we have a dedicated video game projector. It has a ‘fast mode’ for low lag time, a high contrast ratio of 15,000:1 and MHL connectivity for content sharing from smartphones and tablets.

It’s 3D-ready, though you need to get your own 3D glasses (USB-rechargeable, radio frequency, active shutter) for £70 per pair. It’s available now for £749.

White and colour output of 2000 lumens

Screen size up to 300 inches

Manual horizontal and automatic vertical keystone correction up to 30 degrees

Now we enter the higher-end home cinema territory with three models, all out in November. They offer the features found on the two lower models, such as MHL connectivity, but with a boost to performance.

Epson claims these have twice the contrast ratio of previous models. This range also includes frame interpolation in 2D and 3D mode, and lens shift.