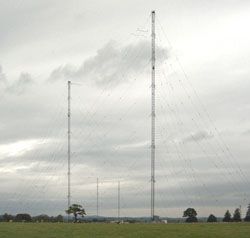 The BBC Radio 4 LW service broadcasts from Droitwich, Worcestershire (pictured), and uses two specially-made valves, of which it is claimed there are only around 10 in the world.

When one of the ageing valves blows, the LW broadcasts will fall silent, claims the Guardian.

Programmes on Radio 4 LW include Act of Worship, Daily Service, Test Match Special and Yesterday in Parliament. These programmes would otherwise interrupt other programmes that are broadcast on FM.

The service's impressive reach and ability to house hours of programming without interruption – such as Test Match Special – have brought the station a small but loyal fanbase.

The BBC plans to find new homes for the programmes when required, with the DAB, FM and internet platforms available.

Denis Nowlan, the network manager for Radio 4, said: "This is technology that is becoming obsolete. Digital radio now reaches 97% of the population, and there is plenty time to find new homes for long wave-only programmes."