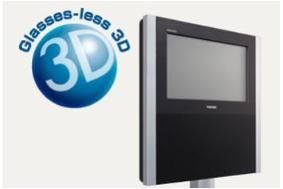 40in+ models are set to appear in more markets, including Europe, over the next 12-15 months, and at CES 2011 the company is showing both 56in and 65in prototypes. It promises glasses-free large-screen TVs in Europe 'during 2011'.

Both prototypes feature LED-backlit panels with 4096 x 2160 pixel (4k2k) resolution, with the company saying that 'The Toshiba Integral Imaging technology applied to its glasses-free 3DTVs works with multiple view points that enable the human brain to see 3D images, while also allowing for a wide viewing angle.

'Thanks to a sophisticated view point overlay technology, users can even move their heads whilst watching 3D content without compromising the 3D effect.'

Products for the European market will use Toshiba's CEVO-Engine, which the company says 'is able to provide the extremely high calculation power needed to run glasses-free 3D technology on the TV's large screens.'

Published 04.10.10
Toshiba is all set to launch glasses-free 3D TV at the annual CEATEC show, which opens in Japan tomorrow.

The company will also be demonstrating a 56in glasses-free prototype at the show, although it says there's no timetable as yet for its release.

There are no current plans for a wider release of the two Regza GL1 series models, Toshiba saying that the launch is 'technology-oriented' rather than being expected to create major sales.

In other words, the company is putting down a marker by being first to market with commercial versions the technology, which uses nine parallax images and a vertical lenticular sheet over the screen.

The TVs use a newly-developed LED-lit LCD panel, using four times the pixels of conventional TVs. In the 20GL1 that means approximately 829m pixels, and an array of 1440 backlight LEDs, to give a 3D image of 1280x720 pixel resolution.

In the 12GL1 approximately 147m pixels are used, to give a 3D resolution of 466x350 pixels. The TVs are designed for viewing distances of 90cm and 65cm respectively, so not exactly living-room-ready yet!

The new sets use the company's Cell Regza Engine to render the 3D image, and the Cell Broadband Engine for multimedia handling.

The head of Toshiba's digital products division, Masaaki Oosumi, says that the technology is 'still not at a satisfactory level in terms of price or screen size. But if you take a long-term view of 3-D technology, the direction is ultimately toward glasses-free.'