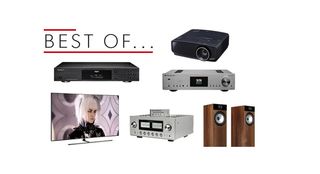 This week Oppo announced it will shut its home cinema business later this year, JVC has launched a new 4K HDR DLP projector and Tidal's music streaming service is set to arrive on Cambridge's streamers and AV receivers.

Spring has sprung and so has the May issue of What Hi-Fi?. Inside you'll find reviews of wireless speakers and noise-cancelling headphones, plus all the latest happenings in hi-fi and home cinema.

Don't forget, you can subscribe to the magazine, or buy the iOS, Android or Kindle editions.

Oppo has announnced that it is to leave the home cinema business after 14 years of trading.

Oppo stated that the company will "gradually stop manufacturing new products", but firmware updates will continue and warranties will be honoured.

The company will continue to trade stock while stocks last. Once that's done it'll be lights out for Oppo - for its home cinema arm, at least.

JVC has revealed a new 4K HDR DLP projector in the shape of the LX-UH1.

It'll support both HDR10 and HLG, with a pair of HDMI inputs (one of which supports HDCP2.2) included. It also comes with 2000 lumens of brightness and a dynamic contrast ratio said to be 100,000:1.

It's available in the from next month and expected to retail in the region of £2500.

Music streaming service Tidal has been made available on select Cambridge music streamers and AV receivers.

Compatible models include the CXN and its V2 version, the Azur 851N, StreamMagic 6 V2 and the CX range's pair of AV receivers.

It's the "brightest, punchiest, most vibrant TV" we've come across, capable of deep, detailed blacks and strong with motion handling.

Factor in plenty of apps, features and a clever evolution of the OneConnect box and this is an impressive effort. A significant step forward for QLED technology.

We very much liked Fyne Audio's first offering, so we were looking forward to seeing whether Fyne's F302 could keep up the momentum.

And it does, with a full-bodied and entertaining presentation. Timing is fantastic, as is the floorstander's dynamic range - and there's plenty of presence at the lower end.

Fyne has produced another class-leader for the cracking price of just £400.

If you're looking a for a one-stop amp solution and your bank account will allow for it, this Luxman is a compulsory audition.

It boasts a detailed, cohesive and powerful performance that's also nifty in revealing subtleties in a track.

We're not awed by the headphone output, which is less lively and expressive than we'd like. Otherwise we were deeply impressed by what this amp offers.