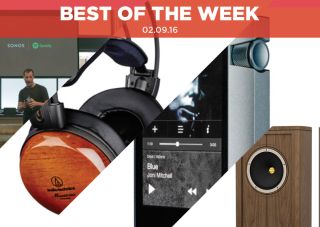 This week there was plenty of news coming out of the IFA show in Berlin, including a release date for the Technics SL-1200G turntable and Panasonic's reveal of a more affordable 4K Blu-ray player.

Elsewhere, Sonos partnered with Amazon to use the latter's voice control technology and Tannoy is turning 90 in style with its Gold GF Reference loudspeaker.

There's also a new What Hi-Fi? out this week, and this one is more special than most as we celebrate our 40th anniversary. You can still read our verdicts on all the latest home cinema and hi-fi kit around (including Sky Q), but this issue also includes some special features, including our Top 40 products of all time - and some of the flops too.

Technics SL-1200G turntable to go on sale this month

After what seems an age, Technics confirmed at IFA that its SL-1200G turntable will go on sale in September. It will cost £2800 with more than 1200 units of the turntable available.

It follows the successful release of its limited edition SL-1200GAE turntable which has completely sold out.

MORE: Technics SL-1200G turntable to go on sale this month

With the Xbox One S out, the price of a 4K Blu-ray player is going down, and Panasonic is set to join that battle with the DMP-UB700.

It shares many (but not all) of the features in the UB900, is an Ultra HD Premium certified product and goes on sale at the end of October, priced £400.

Tannoy's future may still be up in the air, but that's not stopping its 90th anniversary celebrations with the GRF 90 loudspeaker on the way. Named after the company's founder (Guy R Fountain), it features a 12in Dual Concentric Driver and is housed in a bespoke birch plywood cabinet. Only 90 pairs will be made.

Sonos has revealed that it will be partnering with Amazon to use its Alexa voice assistant. Sonos users will be able to control their speakers via any Amazon-voice controlled device.

Also announced was an update to Spotify Connect, which will now allow users to control Sonos speakers from the app.

Toshiba partners with Vestel for a new European presence

Philips unveils its first OLED TV, a 55in 4K screen with Ambilight

Sharp returns with more than 50 HD and 4K TVs

Astell & Kern's AK Jr made a great impression a few years ago and its successor, the AK70, is even better.

Sonically it's more of an evolutionary leap than a revolutionary one over the Jr, but it still retains the Jr's "energetic, open and dynamic" nature. Improvements to the interface are aided by several additional features that make it great to use. The AK70 is another terrific 'budget' effort from Astell and Kern.

It's not often we get a soundbar that produces a convincing impression of a surround-sound package, but this Yamaha comes close.

With its wide spacious sound, it impresses at how well it can steer and direct effects. It's not quite as good as a dedicated surround package, but its involving performance makes for an excellent substitute.

If you couldn't tell, these are large headphones. They're also a brilliant listening experience.

Clear, articulate and insightful, the ATH-W1000Zs offer a wonderfully convincing and unforced sound, though they lack a little rhythmic drive. Throw a busy track at them and they retain their composure with ease.