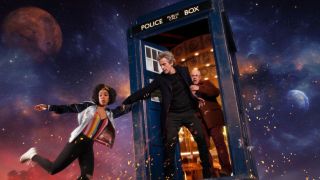 The BBC is to trial binaural audio using its iPlayer catch-up service. It will air a special version of the latest episode of Doctor Who using the technology (following the normal broadcast on BBC One) on iPlayer.

Binaural audio enables virtual surround-sound. When listened to using a pair of headphones, sounds can seem to be positioned in front of or behind you. You don't need a special pair of headphones to get the effect, either - any pair will do.

The technology has been developed by the BBC's research and development team, though it's not exclusive to the Beeb.

Sennheiser recently announced its first binaural audio device, the Ambeo Smart Headset. This is a pair of in-ear headphones for your phone that's capable of capturing binaural audio - in other words, you can record in virtual surround-sound, which will be very handy for anyone creating virtual reality footage.

The episode of Doctor Who with binaural audio is called Knock Knock. It's episode four of the 10th series, and will be available from Saturday.

This isn't the first time the BBC has dabbled in binaural audio. It started researching the technology back in 2012, and has previously released some Radio 3 programmes using it.