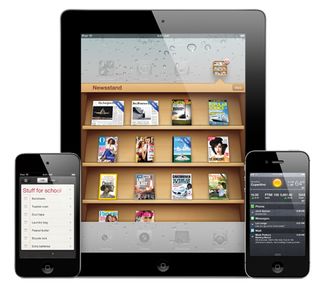 Like many people yesterday evening, I suspect, I decided I’d upgrade my Apple kit to iOS 5 and iCloud. Given all the hoopla surrounding the upgrade, I was keen to see what all the fuss was about.

Earlier in the afternoon I’d already downloaded iTunes v10.5 in preparation. It's worth noting, as kindly pointed out by Forum regular professorhat, that on a Mac, wireless syncing of your iDevice with iTunes 10.5 only works on Mac OS X 10.6.8 (Snow Leopard) or above.

So if you're doing this with a Mac, you must be using this version otherwise the Sync with this iDevice over wi-fi tick box will not be present on the Summary tab.

That done, it was time to plug in my iPad 2 to the iMac using the standard USB cable (hopefully for the last time!) and into iTunes to get the iOS 5 upgrade. A pop-up window told me the upgrade would take about an hour, so I grabbed a book and a cup of tea to pass the time.

Once the iOS5 upgrade had finished downloading, it extracted the software and installed it on the iPad. So far so good. But then trouble struck – as the iPad was being restored with my Apps and iTunes music, up popped an error message and the installation stopped.

Not sure what to do, I clicked on the upgrade button again and the system started reloading my apps and music again. This time it worked. Phew!

Once the iPad was fully restored, a series of screens appeared taking me through the iCloud set-up process using my Apple ID log-in. All very simple.

Next up was the iPhone (I have an older 2009 3G S, not a 4, but it's still compatible with the upgrade). Same process as the iPad, but again an ‘error 34’ message appeared when restoring my apps and music to the phone.

Several attempts at a reload failed, so it was off to the Apple Helpline where I discovered that if I was upgrading the iPhone while it was in a dock connected to the iMac (which it was), this might cause a problem and I’d be better off connecting the phone directly to the USB cable. Which I did. Fourth time round, the sync continued but then suffered another interruption.

However, the info in iTunes told me the iPhone had been upgraded to iOS 5, so I risked disconnecting it. The phone seemed to work fine, but none of my iTunes music had been restored, so I had to reconnect the phone and upload all my music manually (1500+ tracks) which was a tad tedious, but at least it worked.

By this time I’d already spent at least three hours upgrading everything, so my patience was beginning to wear a little thin.

Now if, like me, you have a MobileMe account, then you’ll know that MobileMe will be switched off in June 2012. Which means you need to transfer your MobileMe account to iCloud. Apple provides a very helpful link to the instructions on how to do this on your MobileMe log-in page, so off I went.

Following the instructions to the letter (Had I upgraded my iMac to Lion OSX 10.7.2? Yes. Had I upgraded all my iOS devices to iOS 5? Yes – eventually), I went through all the click boxes until I got to the one that said ‘transfer MobileMe account to iCloud” and then… another error screen saying it couldn’t be done. After several more attempts I gave up.

By this stage I reckon I’d spent the best part of five hours upgrading all my kit. Oh, and then I remembered the Apple TV would probably need an upgrade too. Which it did. Fortunately that one worked seemlessly and only took 20 minutes.

By midnight I’d had enough, so shuffled off to bed. This morning I had another go at migrating my MobileMe account to iCloud and – hurrah! – it worked. Maybe the Apple servers in California were struggling a bit last night, like me.

So finally all my hardware and software is up to date. It just remains to log in to iCloud on my iMac, iPad and iPhone and I’m good to go.

Was it worth all the bother? Well, I’ve noticed some nice little touches on iOS 5. The new pull-down notifications tab is handy, and I like Newsstand which brings together all your magazine and newspaper subscriptions on a bookshelf, just like iBooks (see below).

Even better, iMessage allows free text messaging between compatible Apple iDevices over wi-fi, so with that and FaceTime the iPhone/iPad really does become a handy social networking tool.

In theory, all my iDevices can now communicate with each other over the same wi-fi network, so an app bought on one will automatically download to the other. And I should never need to sync the iPhone or iPad to the iMac using a wired connection again.

Of course, we don’t yet have iTunes Match in the UK, so iCloud only allows you to download music you’ve previously bought on iTunes to your mobile devices. Sadly we can’t yet transfer non-iTunes music we’ve ripped ourselves to iCloud like our American cousins. For now, you'll have to sync the rest of your music collection to your iDevice over wi-fi or using good old-fashioned USB.

Bring on iTunes Match, I say, which scans your music library and upgrades those songs to 256 Kbps AAC, DRM-free (for $25 a year in the US), regardless of how many songs you have.

As for Apple TV, it now allows photos stored in iCloud to stream to your TV, and any video you shoot on an iPad can stream directly to your telly. But, as I just discovered, to make the most of Photo Stream you’ll have to upgrade to iPhoto 11 v9.2 on your computer – that’s another £10.95.

Still, despite all the hassles and the time it’s taken, I have to say that (ultimately) the iOS5/iCloud upgrade is worth it. No longer having to tether your iPad/iPhone/iPod Touch to a Mac or PC is a big jump in the right direction, and the ability to sync everything wirelessly seems a lot more 21st century.

For more information on iOS5/iCloud, read our news story