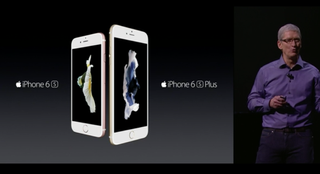 Just when you thought Apple was finally done with its small screen phones, opting for 4.7in and 5.5in screens for the latest iPhone 6 models, it looks like the company could be bringing back the 4in screen.

9to5Mac says the new model is rumoured to be called iPhone 5se, as opposed to iPhone 6c, which had also been suggested. The new iPhone will be no slouch, however, with reports suggesting it will come with various features from recent iPhones, such as the A9 and M9 processors from the iPhone 6s.

Features also carried over from the iPhone 6 include its looks, the 8-megapixel rear camera, a 1.2MP front camera and the NFC chip for Apple Pay. It should also support Live Photos, but is unlikely to have a 3D Touch display.

All this will come in an iPhone the size of the 5s, the phone it’s expected to replace, and it will come with a similar price tag.

Reports also claim that the iPad Air 3 will be held aloft on stage too. The new iPad is tipped to come with new speaker grilles and the peripheral-supporting Smart Connector taken from the iPad Pro. The new Air may also come with a rear camera flash and support for the Apple Pencil.

Finally, the Apple Watch is expected to be given new Sport band and Hermès band options.

If the reports are true, all will be revealed at the next Apple event on 15th March.