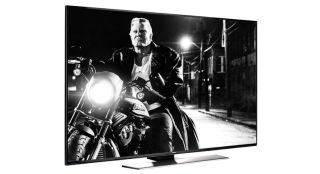 For a start, it depends on what you're looking for in your shiny new smart TV. Is it a second screen for the bedroom or a big-screen TV that'll sit proudly at the heart of your home cinema set-up? And then there's the question of what features you want from your prospective purchase.

Don't fear, however, because we've rounded up nine of the very best TVs on the market in 2015, each picked for being in its specific section of the market, whether that's based on size, price or screen technology.

From 40in to 55in, 4K to curved OLED, and one TV that simply delivers a money-no-object, ultra-premium TV performance: there should be something for everyone.

OK, the demand for larger screen sizes - over 50in - might be growing year-on-year, but there's still space for smaller sets. Not everyone has the space or inclination to have a monster screen, while those do might still want a screen such as this for another room. The thin bezel means it's small and looks the part.

This Sony 32in TV is unlike many rivals at this price in that it uses a Full HD 1920 x 1080 resolution panel - and the benefits are clear. The picture is a tremendously well-balanced watch, the TV is full to the rafters with smart and catch-up features and even the sound is decent. After the best 32in TV? This is a no-brainer.

There hasn't exactly been a shortage of terrific 40in sets to choose from in recent months - it's a hotly-contested part of the market. The level of performance and features that you can now get for your money has never been greater - but what makes this Sony effort so special?

Straight out of the box, it makes its case in convincing fashion. Even before you get to some of the basic settings, the picture shows itself to be both subtle and punchy. And its performance is as consistent for upscaled content as it is with native 1080p stuff.

And what of its features? Well, the connectivity and ergonomics of this set would be admirable at any money - but, for the pared-back price tag here, they're deeply impressive. It ticks all the right boxes: performance, functionality, usability, looks and build quality. What's not to like?

TV Product of the Year, Awards 2014 - we could leave it there, but allow us to extol this Samsung screen's virtues some more. Our rundown of the best TVs on the planet wouldn't be complete without this 48in LED/LCD model and it's sharp, clear and full of detail. The 6400 has you hooked from the word go.

HD pictures burst with clarity and crispness, while great contrast and minimal picture noise help make the Samsung's active 3D processing enjoyable. And if you switch down to SD content, the UE48H6400 is pretty heroic - the picture noise is controlled well, while motion hardly suffers at all.

The Samsung comes with decent styling, extensive specification in terms of socketry et al and a wide range of catch-up services. All this means that this Samsung stands head and shoulders above all others in its class.

For some manufacturers, 4K Ultra HD is all about the bigger picture - you'll hear claims that it's best viewed on screens spanning 55in and above. But the Ultra HD picture quality of this 48in Samsung TV suggests that isn't always the case.

Three of the 4K TVs in this round-up come from the Korean company's HU7500 family and that means it'll come as no surprise to find the specifications are closely matched. If you can afford it and want to embrace 4K technology albeit in a smaller package, then we wouldn't hesitate to recommend this TV to you.

There's premium and then there's luxury. And, to us, luxury is a concept that is as much about how a product makes you feel when you use it as it is about outright performance - not that a good picture doesn't help on that front, of course. But it's the feeling of using B&O's Avant that sees the company take the fight to its premium rivals.

This 55in set happens to be a very good 4K TV in its own right, but the whole package takes ownership to the next level. The design, as you might expect from B&O, is lovely - the screen is surrounded by a smartly finished metal chassis. It's one of the classiest TVs and consumer experiences that you can get for your money today. But yes, it is rather expensive...

Can you believe that, 12 months ago, you'd be looking at £8000 for a slice of LG's curved OLED TV technology. Now, with the Korean manufacturer committing to more OLED screens in 2015, the prices have come tumbling and you can now indulge yourself in the stunning picture quality for a fraction of the cost.

The 55EC930V is a beautiful specimen of a TV, even when it's a blank screen. And though you may not be convinced by the merits of the screen curvature, it doesn't half give the set some serious aesthetic appeal. Any issues? The lack of 4K support is a shame - but then the lack of 4K content means many people may not be concerned by that.

MORE: OLED TV - news, reviews and everything you need to know

If you're smitten by the idea of 4K Ultra HD but put-off by the price, then take a look at the Samsung UE55HU7500 - a big-but-not-too-big TV with a price tag that's tumbled below £2000 and into the price range of far more people.

The thing that sets it apart from its rivals is the prodigious combination of picture quality, build quality, online functionality, design and ergonomics. The screen is best with 4K material (such as some native Netflix 4K content), but it is also a convincing upscaler when it comes to lower-resolution content - even standard-def TV broadcasts.

MORE: 4K TV - news, reviews and everything you need to know

Curved TVs aren't to everyone's liking, which is why the Samsung UE65HU7500 is the TV to turn to if you're after a flatscreen 4K option. It was the first-ever 4K set to get a full five stars from What Hi-Fi? and achieves a fantastic balance between 4K, Full HD and standard-def picture quality - something that isn't easy to do.

This Samsung is also pleasant to use, easy to live with and stacked full of functionality. You even have the choice of two remotes, including a smart-wand that has a motion-sensitive on-screen pointer that's both responsive and easy to use. All things considered, the UE65HU7500 is a class television that's definitely work a look.

It's always the case that you want to arrive late rather than not at all - and that is certainly true of the Sony KD-65S9005B. The Japanese tech giant has, at last, arrived at the curved 4K party, albeit with a slightly shallower bend compared to its rivals; the idea being to reduce any curved TV issues when viewing off-axis.

One of this set's main strengths is the sound quality, with the TV able to process Dolby Digital and DTS signals directly and pump them out as virtual surround sound from its built-in 4.2 speaker system. Add to the equation its lovely picture performance, smooth motion and excellent functionality and you have yourself a seriously good TV.

Want more choice? See our complete round-up of the best TVs you can buy in 2015