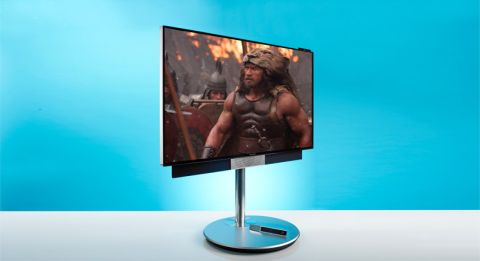 The BeoVision is expensive, and flawed in some areas - but we still want one

Luxury is a quality that’s sadly lacking in TVs. Even high-end models from industry giants such as Samsung and Panasonic barely hint at it. Sure, when it comes to features and technology, these range-toppers tend to be right at the cutting edge, but that’s not what luxury is all about.

We think it’s a concept that’s as much about how a product makes you feel when you use it as about its outright performance. It’s clear Bang & Olufsen understands this well.

The BeoVision Avant 55 may be a 4K set, but that resolution is not the thing that grabs our attention. Initially, it's the elegant motorised stand. Yes, that's right, the stand. Once programmed, this lovely all-metal structure - yours for a mighty £1195 - swivels the TV into the right viewng position with all the grace of a ballerina, its multitude of motors rotating the base as well as the the upright that supports the TV.

Ostentatious? Certainly, but useful too if you happen to watch TV from a variety of seating positions. The support also tucks the TV out of the way once you switch it off, helping to free a little bit more space in the room. B&O also makes a motorised wall bracket (also £1195) that performs similarly pleasing gymnastics.

The motorised action doesn’t stop there. As the TV glides into position, the Avant 55’s speaker array lowers into place. It is, in effect, a built-in soundbar.

The 55 as a whole uses no fewer than eight drive units, each with a dedicated 60W amp. The drive-unit complement comprises a trio of tweeters, three midrange drivers and two bass units. B&O has a reputation for producing fine-sounding TVs and with this kind of elaborate specification it’s easy to understand why.

The company also understands that, no matter how well the product is built (and it is lovely, with a smartly finished metal chassis), the user’s main point of contact is the remote control handset. It’s a rather obvious point that many manufacturers simply don’t pay enough attention to.

It’s something that B&O invariably gets right. The aluminium-cased unit supplied with the BeoVision Avant is beautifully balanced, nicely weighted and laid out with care. Compared with this, most other TV remotes look and feel as if they belong in a bargain-basement bin.

The Bang & Olufsen proposition doesn’t stop there. While most TV purchases involve you trying to wedge a big TV box into your car and getting the thing running yourself, with the Avant things are different. We would certainly expect the dealer to install it for you, though we have no doubt it would be for a charge.

The price would depend on how much work is required, but it’s something we recommend, because there are a lot of adjustments and features here that are easy to miss for anyone not familiar with the product.

We suspect the combination of motorised stand, gorgeous remote and the theatrics of the retractable speaker coupled to the classy overall appearance will go a long way to opening many people’s wallets. We need more though. Looking through the specifications we start to worry for this 4K set.

We notice that it’s equipped with only HDMI v1.4 connections, which limits inputs of 4K video to no higher than 30fps. The other issue is that there’s no on-board HEVC decoding, making Netflix 4K playback no-go.

So B&O has given us a 4K screen that can’t show the only proper 4K source we have at the moment. Clever. And if you can get some outboard video streamer to do the job, the quality of its output could well be compromised by the older-generation HDMI connection used.

Seems like an own goal and, to a certain degree, it is. We’re sure there are engineers within the company working to sort these things out. At least we hope they are. So, is this limited 4K capability a deal breaker? Almost, but not quite.

The vast majority of source material available is in standard or HD, and will remain so for a number of years to come. It’s how the Avant performs with these video standards that concerns us most. Here it’s on solid ground.

We start off with a Blu-ray of Her and are deeply impressed by what we see. The BeoVision delivers a bold, confident picture with rich, but still convincing, colours. Difficult-to-do things such as skin-tones are rendered with finesse, while bolder colours such as the greens in grass or the blue of a clear sky are delivered with skill.

The Avant’s detail levels are excellent – edges of objects are drawn with precision, while long, slow camera pans have a deeply impressive stability. Move over to Thor: The Dark World and we enjoy the B&O’s excellent contrast.

It can combine dark and light elements in a single frame really well. Black rendition is excellent with this edge-lit LCD panel delivering proper darkness without overtly glossing over details in the shadows. It’s a terrific balancing act few LCD sets manage. There’s also subtlety in bright objects – things such as bright sunlight streaming into a dark space come through with uncommon nuance.

Next we try 3D in the form of Martin Scorsese’s Hugo. The opening scene (the camera tracks over the city and through the train platform) is delivered with confidence. The image is crisp, with excellent depth. There’s still a slight element of layered 2D rather than the fully rounded presentation of the very best sets, but the active 3D on this B&O remains stable and easy to watch over longer periods.

There aren’t any glasses in the box – you’ll have to pay extra (around £95 each) which feels mean considering how expensive the set is.

What of 4K? Source material remains scarce, and without the ability to access Netflix we’re left with B&O’s demo footage showing plants, skyscrapers, coastlines and castles.

We find it engaging viewing. Not really - it’s as dull as anything, but it looks terrific. You can sit unfeasibly close to the screen and still enjoy a sharp, clean picture. Colours are impressively vivid while still looking natural, and edge definition is excellent.

We’re also impressed with motion stability, particularly in a clip that pans across London’s landmarks. It makes us all the more annoyed by the set’s innate engineering limitations.

It’s always going to be hard for standard-definition material to look good on a 4K screen – after all, the set has to guess the output of 19 pixels out of 20. Still, we’re pleased with what the Avant manages. The DVD of Stoker looks a little soft and blurred with fast motion but remains a decent watch.

We notice similar effects with standard-definition broadcasts, even if the BeoVision still does a fine job with colours and contrast. Move to HD channels and things get markedly better. It’s a crisp, clean presentation that suffers low levels of noise.

What of that elaborate sound system? It’s as good as we’d hoped for. While no alternative to a proper surround set-up, the built-in speakers are way ahead of what most TVs manage. There’s a decent degree of detail here and it has dynamics expressive enough to communicate the emotional content of voices well.

But that’s not the whole story as far as audio is concerned. B&O has built in a 7.1 surround processor that handles the full range of film sound formats (bar Dolby Atmos). Connect the Avant to any of the company’s extensive range of speakers and the BeoVision becomes a home cinema hub.

It’s customisable too, in the sense that, once configured properly, the speaker set-up can be programmed to change if a different viewing position is chosen. That’s neat and thoughtful.

Smart functionality? Not so smart. There’s BBC iPlayer and You Tube, but not much else. B&O will argue that a partnering Blu-ray player or another source is more than likely to have such functionality built-in - and it has a point.

But it’s still disappointing to note the shortcoming. On the audio side, Spotify and Deezer music services are built in.

So where does that leave us? We are disappointed with the poor execution of 4K more than we are by the lack of smarts. That price tag is pretty high too. But balanced against this is the Avant’s fine HD picture and commendable handling of standard-definition material.

It sounds excellent, and that’s before extra speakers are added to make it the heart of a full home cinema set-up. We can’t overlook the sheer class of the thing either. It really does look and feel special, from that lovely remote and motorised stand right down to the thoughtful arrangement of the menus.

This is one of the classiest TVs money can buy, and unfortunately class is a quality that rarely comes cheaply.