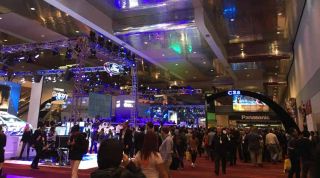 While robots, 3D printers, wearables and electric cars may increasingly steal the limelight from the big-screen TVs and audio products that traditionally hogged the CES headlines, there's still a huge amount of AV kit to get your head around in Las Vegas.

Whether it's TVs and turntables from Samsung and Sony, or speakers and DACs from specialist audio companies, there's no place like CES when it comes to getting a first look at a huge number of new products, and a feel for the overall product trends for the year ahead.

No longer an ultra-expensive, curved novelty, OLED TVs will arrive in force in 2016 - and some of them will be flat. LG is certainly adamant OLED is the future, and Panasonic and Sony appear to agree based on the companies' new models. As for Samsung? OLED TVs are so far notable by their absence in the company's range. One thing's for sure, the rivalry between LG and Samsung will mean if Samsung does come 'second' to the market, it will want to do so in style...

MORE: OLED TVs - everything you need to know

High Dynamic Range (HDR) was the key box to tick for every flagship TV this year, with LG, Panasonic, Samsung and Sony all announcing HDR-compatible TVs. Could this be a more important step towards better pictures than 4K resolution? When What Hi-Fi? spoke to LG, it certainly seemed up for debate. With the HDR spec now official, expect to see more compatible devices this year.

With devices must come content - and there was good news on next-gen video at CES 2016. Ultra HD Blu-ray players were confirmed by Panasonic and Samsung, and the $400 price tag on the Samsung machine was more affordable than many people had predicted.

Netflix also quietly announced its expansion to 130 new countries. As it's one of the key players when it comes to delivering 4K content, that has to be a positive. Amazon already has 4K HDR video live on its Prime Video service, so Netflix is playing catch-up here. We'd imagine not for long...

And it's not just video that's stepping up a notch this year, there was plenty of focus on next-gen surround sound at CES. Dolby Atmos and DTS:X set the ball rolling, bringing superior surround sound from the cinema to the home (and mobile) last year. This year at CES it was all about bringing Atmos to more devices, with Atmos soundbars launched by Philips and Samsung (albeit there was still no sign of anything Atmos from Sony).

There were also new takes on 3D sound, notably from Auro-3D and Sennheiser Ambeo. There are endless possibilites for 3D audio tech thanks to virtual reality devices, so we expect to hear plenty more about next-gen surround sound in 2016.

5. Turntables are back. And wireless.

The vinyl revival over recent years has been well documented, so it's only natural that turntables would be on the agenda at CES. While many people buying records in 2016 will continue to be lured by cheap all-in-one systems, despite our warnings to the contrary, it's good to see plenty of attention on record players slightly further up the food chain.

The Technics SL-1210G stole the show, even if the price tag left some people scratching their heads, while there were also new wireless turntables from Audio-Technica and Sony, among others. It looks as though vinyl will remain in vogue for the forseeable.

Since the iPod's inception, headphones have been big business at CES and 2016 was no different - but the trend here was preparing for the Apple headphone jack-pocalypse. Rumours suggest Apple will remove the standard 3.5mm headphone input from its next iPhone, pushing people to connect instead via Apple's Lightning port or wirelessly. As a result, wireless headphones were everywhere, and there were also examples of Lightning-connected headphones, such as the Audeze Sine. Expect to see plenty more of both types in 2016.

Internet of Things has taken over as the new buzzphrase for the connected home. IoT became a real thing at CES, with Samsung adding the tech to all its 2016 TVs, while also demonstrating the Family Hub fridge, which comes complete with a 21.5in screen, speakers, cameras and, frankly, far more connectivity than you would ever imagine a fridge could need.

While streaming your music to your fridge's speakers might seem a little unnecessary for most of us (though being able to check whether you've got milk by looking at a live video on your phone of the inside of your fridge did sound quite clever), it's a clear sign that the connected home will be much more than controlling your windows and heating, with AV products now being brought even more into the equation. 2016 is the year that all your technology talks to each other.

See all our CES 2016 highlights