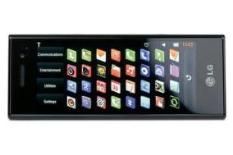 The BL40 is from LG's ‘Chocolate' range of phones, designed to offer greater sophistication than a run-of-the-mill handset.

Well, the BL40 certainly looks elegant and the chassis is sturdy. The four-inch, 21:9 aspect ratio touchscreen makes the BL40 over 12cm long, giving the slim phone a very feminine appearance.

Its size does mean it struggles to sit comfortably in a pair of jeans.

Videos viewed on the 345 x 800 resolution screen look good, even when 16:9 content is stretched.

Colours are lush, movement is handled well and edge definition is on a par with the best phones around.

Sound is acceptable, too: we'd like greater dynamic punch, but it's inoffensive enough.

Unintuitive interface
Our main gripe doesn't lie here, but with the frustrating interface. The touchscreen is unresponsive and the phone is sluggish when flicking between menus.

In a market dominated by the iPhone, it's nice to see that the BL40 offers something different. But the LG's potential is hindered by a harrowing user interface.