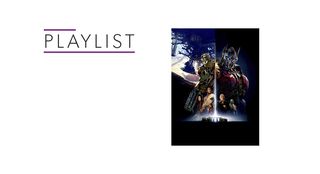 Back in 2007, things looked promising for a Transformers film. Computer animation technology was coming to fruition, Shia LaBeouf, the kid from Even Stevens, was headlining and Michael Bay seemed a decent fit to bring the 1980's cartoon to life.

But ten years and four films later, it feels like that potential has been squandered. The Last Knight shows signs of franchise fatigue having set in – it's a film of gigantic scope, but ends up being content to simply go through the motions.

The storyline of The Last Knight is both vague and needlessly complex. The Autobots and Decepticons are still at war, Optimus Prime is off-planet and Earth appears to be under threat following the discovery of strange structures.

To add to the problems, the Transformers' home planet Cybertron is on a collision course with Earth, for reasons that are poorly explained.

The film gets off to a decent footing, with an entertaining sequence set in medieval times where King Arthur and ancient Transformers fend off an invading horde. Stanley Tucci puts in an amusing cameo as a drunken Merlin.

But if that raises hopes for a decent film, it falls apart mere minutes later by reintroducing a conflict that's become tiring. With more additions to an already confused mythos, the storytelling becomes more and more muddled.

Mark Wahlberg's Cade Yeager returns, along with Josh Duhamel's Lennox and John Tuturro's Simmons, but their performances aren't engaging enough to leave you invested in the story.

Sir Anthony Hopkins, Laura Haddock, Tony Hale and Isabela Moner are the new faces, but the larger cast makes for a cluttered narrative. Many of them (including the robots) are clichéd, annoying or just not interesting enough to hold the attention.

The film has a strange sense of humour. At times it's bizarre enough to elicit a chuckle, but the scattergun approach to its targets resembles a relentless volley of verbal diarrhea.

At 155 minutes, the film long outstays its welcome too, with Bay's frustratingly choppy editing skills showing a tendency to introduce characters and then forget about them.

But the visual effects are phenomenal, even if the transformations are too complex. Parts of the finale set above Stonehenge are stunning, but overall, The Last Knight is so unengaging that it simply washes over you.

Bay's visual style and storytelling ability don't appear to have evolved either. Maybe a fresh approach is needed to avoid the feeling that the series has run its course.

98 per cent of The Last Knight was shot with IMAX 3D cameras, with visual effects done at 2K and 4K (for IMAX sequences). Despite being shot at 4K, 6.5K and 8K, the film's Digital Intermediate was done at 2K, meaning it has been upscaled to from 2K to 4K for this release.

In spite of that, it looks great. Compared to the Blu-ray, colour tones are richer and more vibrant. Bay puts the onus on colour saturation, which makes for a glossy, sun-drenched image.

Explosions (and there are lots) have an orange/red look, while the Blu-ray appears to err on the side of a more orange and yellow hue. It's a small detail, but adds to the feeling that the 4K HDR Blu-ray is infused with colour.

Shadows and shading are arguably too strong, with details, such as the patterns on the horde's armour in the opening scene, being obscured a little. However, as with other 4K presentations, it does make for a firmer and more rounded image.

While Blacks are impressively deep, whites are hot to the point where detail and colouration is lost. We'd put this down to Bay's filmmaking style, which has always opted for a high-contrast approach.

The IMAX ratio offers great clarity and detail (the ratio changes aren't too annoying either) and with a rich and vibrant colour palette, making this an enjoyable 4K image.

At the time of testing, we didn't have a TV with Dolby Vision installed. If we receive a suitable model, we will update this review.

The sound mix for Transformers films feature aggressive bass and The Last Knight is no different. It's in your face from the off.

In the scene where Grimlock intercepts a convoy of TRF vehicles, the bass almost shakes the floorboards. But despite the heft, it comes across as clear and well done.

Dialogue is channelled through the centre speaker and is clear throughout. There isn't a huge amount of Atmos use, but when the height channels are engaged, it's to good effect. This track is less about height and more about filling the room.

It's a busy film, but the way the front and rear surrounds work together makes for an immersive experience. Timing is excellent, as are the positioning of effects and panning too. At times there's almost too much happening, but the clarity helps tie it together.

In the chaotic Stonehenge sequence, Osprey helicopters crash land, alien planes rush past, bullets whizz towards their targets and explosions rock the room, but it's all organised well enough to make you feel like you're in amongst the action.

It's an excellent, at times visceral track that can fill a room with ease. Despite the quality of the film, the soundtrack is very enjoyable indeed.

The Last Knight is a disappointment. The storytelling is soporific, the logic bewildering and sense of humour very odd.

For those who enjoy the series, it's more of the same on a massive scale. The visuals are often breathtaking, but at the end, we are left feeling frustrated by the empty spectacle.

Technically the 4K HDR Blu-ray is fantastic. The image is bold and colourful and the sound is hugely immersive. It has both Dolby Vision HDR and HDR10, and while we couldn't test the former, you won't be disappointed with the performance of the latter.

If only the storytelling and characters were on par with the visuals and sound. The 4K remastered 1986 animated movie remains the most enjoyable Transformers film, but The Last Knight suggest the whole series is in need of a fresh approach.