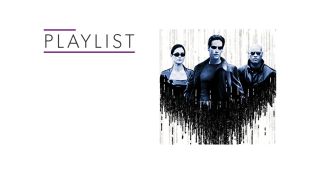 For people of a certain age, The Matrix is the film that woke you up to the possibilities of what cinema can do.

It was fresh, new and exciting, making everything else that came before just that little bit stodgy. Such was its impact, it even inspired books on religion and philosophy.

The premise sees hacker Thomas Anderson (Keanu Reeves) learn the true nature of his reality from a band of rebels led by Laurence Fishbourne's Morpheus. He joins the fight to free more humans from the control of machines who have enslaved mankind.

The Matrix's fusion of philoshopy, Hong Kong-inspired action scenes and various other influences (like Alice in Wonderland) still holds up. As a piece of entertainment, it stands the test of time.

It's a product of the late 90s and has aged, but not in ways that prove detrimental. Bullet Time and the visual effects in general don't feel as impressive now, this 4K release highlighting the low-res look of some effects.

Nokia flip phones aren't as cool in the face of touchscreen smartphones (but we'd love to get our hands on a Nokia 7110). And who doesn't start moving their head to the beat of Rage Against the Machine's Wake Up? Just us then?

In other aspects it remains a fabulously enjoyable film. The uncluttered narrative and tight editing mean that at 136 minutes The Matrix zips by. Its themes (the idea of what's real and what's not, of freedom fighters taking on the establishment) are just as relevant today. The discovery of the 'real world', the quality of performances or just the inventiveness of the visuals make for a film that's like an old friend whose company you find reassuring.

The score by Don Davis is unique, a singular piece of work. Bill Pope's cinematography is beautifully composed and Woo-Ping Yuen's action choreography brings that Hong Kong flavour that was much-imitated but not equalled. Kym Barret's costume design looks wonderful in 4K, though we'll always find the amount of PVC clothing a bit much.

The 4K is a chance to rediscover the film in its remastered glory. For those who haven't seen it, it's a thrilling, classy and cool film that's thought-provoking and immensely entertaining.

It's star might have dimmed in recent years – the mixed response to the ambitious sequels didn't help – but The Matrix remains a pillar of science-fiction.

This disc comes from a new 4K HDR (HDR10 and Dolby Vision) scan of the original 35mm negative supervised by the film's Director of Photography, Bill Pope.

What's immediately noticeable is the amount of film grain present, a feature we've not noticed before in previous viewings. The film has a really gritty and grainy feel that's organic in its look and never becomes a distraction.

The intensity of colours is stronger. They are deep and vivid in a way that produces a richer, more textured look. Accuracy is better, and colours are better resolved. For example, the green interlaced code of the matrix is brighter, but it's not overwhelming. It's a beautifully balanced image and in some respects, this is a more naturalistic image than we've seen of this film.

Detail is just incredible at times, very sharp and revealing - the corridor sequence is an excellent showcase for this. Complexions are varied but strong, well composed and natural-looking.

Blacks are bold and deep, though the OLED TV we used may overstate that performance as well as obscure a tiny bit of detail. Shadow detail adds texture, while producing a nice sense of shape and depth.

Whites are cleanly reproduced, while the green and blue tints appear to have been dialled down a notch. They're still vibrant when called for, but the disc emphasises the more natural look we mentioned earlier.

This new transfer of The Matrix is brilliant - vivid, bold and naturalistic too. It's a well balanced, impressively controlled look, and if it weren't for the visual effects showing their age, you wouldn't have thought this film was almost twenty years old.

If you haven't sampled it by now, then what are you waiting for?

The Matrix gets a Dolby Atmos soundtrack for its 4K release - and it is a belter.

Right from the off the Warner Bros' logo carries with it a sense of weight, before the film transitions to the iconic green matrix code that bristles with energy. The sound design is so important for this film and it is impeccably rendered, with a clarity that's enormously impressive.

Bass is a big and arresting presence, but also clean and tightly controlled. Even at its loudest it remains commendably composed. It's a revealing track in terms of the amount of detail that can be dug up, with instances of sounds in the background that add to the overall ambience. Dynamics are really engaging, the transitions from loud to quiet are handled with an ease that's impressively fluid.

Atmos opens up the height channels and brings an extra sense of spaciousness to what you're watching. Rain and thunder effects are convincing in their placement in the overhead channels.

The moment when Neo and Trinity call for guns ("lots of guns") fills the room with a huge, expansive sound, while the Bullet Time sequences pan through the surrounds so well that you're tempted to reach for the rewind button.

Dan Davis' atonal, orchestral score fills the surrounds and the room with an expansive quality that's an excellent, expressive accompaniment to the action on screen.

There are plenty of imitators, but none as good as the original. Returning to The Matrix makes you wistful for when films weren't packaged as part of a shared universe and just told a thrilling and exciting story.

This 4K release is fantastic. The picture is striking, enhancing and perfecting the film. It's likely to be the best the film has ever looked. The Atmos track is brilliant, big, loud and enveloping - it adds a new dimension to the film.

You can't go wrong with this release. Warner Bros has rolled out the red carpet and given the film the 4K treatment it richly deserves.