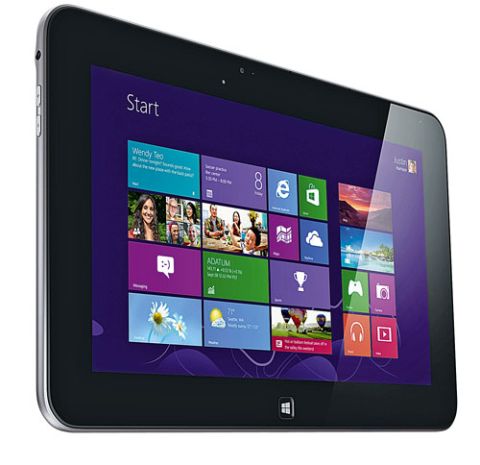 Not perfect, but the Windows 8 Dell is an appealing alternative to the usual tablet suspects

Between laptops and tablets sit hybrids often referred to as a convertibles. The Dell XPS 10 is one such device, in that it’s available with a detachable keyboard for an extra £120.

That’s obviously pretty steep, but as well as making it easier to take advantage of the Microsoft Office suite that’s pre-installed, it also boosts battery life to up to 18 hours and adds USB and HDMI outputs, so for some it will certainly be worth it.

It’s also available in tablet form, though, and that’s how we’re tackling it.

The wide-aspect ratio should make it more movie-friendly, but the overall look is a bit plasticky and there’s a little creak and rattle in the casework.

Get it going, though, and the new Windows 8 Start interface is a colourful, customisable pleasure, and while it takes a while to get used to where all the features are (generally in a menu you pull in by swiping from the right), within a few hours it’ll be close to second-nature.

The Dell’s version of Windows 8 is RT rather than full-fat Pro, so you can’t install standard Windows programs on it. Instead you’ll be relying on the Windows 8 app store, which might not get close to the Apple App Store just yet but does cover most bases and is growing quickly.

You do still get access to the traditional Windows desktop with RT, and although navigating the little icons can be a little fiddly, you can easily drag-and-drop files and access other computers and devices on your network with ease – something that Android and iOS devices can’t claim.

Windows 8 also comes with Xbox Movies and has Netflix available at the Store. The former might be a little expensive by on-demand standards, but it’s also well appointed with new releases that look superb on the Dell’s HD-Ready screen, with Looper being presented with bags of detail, really nice, natural colours and just the right amount of authentic grain.

It’s a shame, then, that the sound quality through headphones can’t match that. It’s got enough clarity and bass weight to handle movie soundtracks reasonably well, but it’s too easily coaxed into brightness.

That’s not to say we’re not keen on the Dell. Movie performance is very good, the app count is growing, and Windows 8 offers features that other OSes can’t. Give it a go…