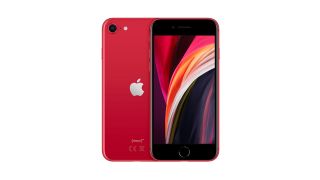 Apple budget iPhone is back. The iPhone SE (2020) is great news for those who want an up-to-date iOS experience without the eye-watering prices of flagship handsets such as the iPhone 11 Pro and iPhone 11 Pro Max. Indeed, we concluded that "Apple’s budget iPhone delivers a satisfying and slick smartphone experience at an attractive price".

This page finds and features the very best iPhone SE (2020) deals around, both on contract and SIM-free – we do the research so you don't have to! That way, you can sleep easy knowing that you're getting the best deal when spending your hard-earned cash on an SE...

iPhone SE (2020) 64GB | 2GB data | £10 upfront | £23 a month
Dixons Carphone's mobile arm uses Three's network, and it has a superb deal on the iPhone SE. Just a tenner upfront and £22.99 a month gets you 2GB of data plus unlimited calls and texts. It's only the 64GB handset, mind, which is worth bearing in mind if you take a lot of photos, videos, films and songs with you. But still, what a deal.View Deal

The iPhone SE (2020) has a lovely 4.7in Retina HD display that supports Dolby Vision and HDR10.

The second-gen iPhone SE is powered by the same Apple A13 Bionic chip found in the 11 and 11 Pro, too, making it among the fastest and most powerful iPhones out there.

The new iPhone SE features what Apple describes as its best-ever single-camera system in an iPhone – and we found it to be a "a solid point-and-shoot snapper". It's a 12MP camera with software including Apple’s Portrait mode, all six Portrait Lighting effects and Depth Control. Video capture goes up to a maximum of 4K resolution at 60fps.

Design-wise, the most notable thing to know about the iPhone SE (2020) is that it's smaller. You still get quality, though; it's built with an aluminium and glass body, and is available in a choice of white, black or red finishes. This iPhone is water- and dust-resistant to IP67 standards.