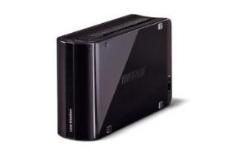 Cute and neat, the Mini will be a great option for many, but not all, NAS buyers

The NAS drive, a network-attached hard-disk that can share your files with your digital devices, is increasingly popular, so it's no surprise we're seeing new, more home-friendly kit emerging.

Take the Buffalo LinkStation Mini: it's the smallest NAS we've seen (8 x 4 x 13cm), but it's not short of clever features.

For example, because it uses 2.5in hard drives rather than the more common 3.5in versions, it's able to cram two into its casing.

That allows a RAID 1 configuration, duplicating data over both disks. This reduces capacity to 250GB, but gives excellent data security.

The Mini runs quietly, there's a BitTorrent client for direct downloading, and it will also switch on and off in synch with your computer.

However, there's just one USB socket, but given the Mini's size, we can forgive it.

Compatibility is more of an issue: the Mini won't talk to either the Xbox 360 or Logitech's Squeezebox. If you don't own one of these, the Mini still appeals, but equally, some bigger rivals are more flexible at this price.