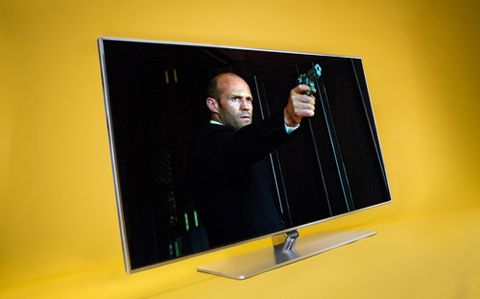 We have high hopes for the Samsung UE40F7000. We’re no strangers to the Samsung Series 7 TVs: the UE46F7000 came out of our test rooms with the full five stars, so this F7000 40in sibling will look to prove the same level of TV performance is consistent across the 2013 range.

One of the first things we noticed about the Samsung UE40F7000 was its stand, a modest rectangle with rounded edges. It’s a far cry from the gigantic arc on the Samsung E55F8000, which extends past the edges of most standard AV racks, affecting the set’s stability. What we have here is less imaginative, perhaps, but it feels much safer.

The screen itself is slim and elegant, with a thin bezel surrounding the 40in LED screen. Samsung has bumped its glowing logo off the frame (and down to the non-swivelling stand), which looks rather smart. This set also has a small, well-made built-in camera. It hides at the top of the TV, popping out when you give it a prod.

Overall build quality of this 40in F7000 is very good – but make sure to take care when assembling and attaching the stand. The screws can be a little stubborn, threatening to make the TV a touch wobbly unless they’re fully tightened.

The back of the UE40F7000 features a comprehensive collection of inputs: four HDMI, three USB, composite, component, RGB Scart and ethernet (along with built-in wi-fi). There’s also a headphone jack and an optical out, as well as antenna sockets for Freeview HD and Freesat.

As is now common practice for Samsung, there is a slot for a Smart Evolution kit, which allows you upgrade the module responsible for picture performance and features without scrapping your TV. It’s a great example of future-proofing.

Samsung has provided two remote control handsets – one with a bit of song and dance, and one without. The more traditional unit is small, slim and easy to use although the buttons feel a little spongy when pressed.

Samsung's Smart Touch remote is a shinier, slicker alternative, with most of the buttons replaced by a touchpad. This works like the screen of a smartphone, allowing you to flick and swipe your way around apps or the web. It takes a little practice, but you’ll be zipping around in no time. One feature we rather like is the ability to draw a number on the touch pad to change channels.

You also get motion control, via that built-in camera. Wave at the screen and an on-screen pointer will show up. Drag the pointer over something (say, the volume up icon) and close your hand to select. We’re not sure about the usefulness of these controls: they sound cool in theory, but in practice it’s not as intuitive or convenient as we’d hope.

Samsung seems determined to get it right, and the experience is responsive enough when it comes to waving at the screen to change the volume or channel, but it’s still not as natural or easy as doing it on a remote control.

Voice control is something that we’ve struggled with in the past, and it’s not much better on this 40in F7000 TV. Press the mic button on the Smart Touch remote and you’ll have to wait until permitted to speak. And when you do, it’s often unresponsive and frustrating. Credit to Samsung for not giving up, but voice control is simply not yet ready.

There’s also a free Samsung remote control app, in case the two remote controls don’t take your fancy. Samsung SmartView is a slick, responsive app and a true second-screen experience. On a basic level, it mimics the basic functions of your regular remote controls, allowing you to change channel, volume, or source.

What we really like is the additional ability to watch TV on your phone. You can change channels on the app, independent of what’s on the bigger screen. Say goodbye to being stuck with someone else’s TV tastes.

Compatibility seems a bit hit-and-miss, however. We managed to download the Samsung Smart View app on an iPhone 5 and a Samsung Galaxy S2, but (strangely) not the new Samsung Galaxy S4.

The Samsung Smart Hub is an attractive, user-friendly carousel. There are five panels, with apps neatly presented in grids. Each panel represents a different category:

Social takes care of social networking mainstays such as Facebook, Twitter and Skype. Skype, naturally, makes use of that on-board camera. It works well, with a decent-quality picture, although shouting at the TV still feels a little odd.

Apps houses your collection of, well, apps. A band of recommended content appears at the top, while your own chosen ones are listed below. Clicking on ‘More Apps’ brings you to everything else available to download.

On TV shows you everything to do with broadcast TV. You can access the programme guide, switch to a timeline view, record content and see previews of what’s on next. The S Recommendation feature looks at your viewing history and suggests similar shows. The technology becomes more personalised the more you watch, so it takes a while to be effective and ‘learn’ what you like.

Movies & TV shows aggregates all the films and TV shows available on apps like Lovefilm and Netflix. Once you choose what you want to watch, select which service you’d like to stream or download from.

Photos, Videos and Music is where you access your own content if you have external storage devices or a networked computer.

It’s easy to get distracted by all the smart features, but it’s important to remember that the Samsung UE40F7000 is also a television. We load up a THX disc and set about optimising the picture – a swift task thanks to the intuitive and responsive menu system.

Watching the DVD of The Dark Knight, we're impressed. Contrast is excellent and there are very deep blacks levels on display. The F7000 delivers superb detail and definition without things ever looking overly sharp and unnatural.

We move up in resolution to Blu-ray with London 2012 Olympic Games, and it’s a similarly accomplished performance. There are layers of subtle detail, and motion handling is smooth enough not to require any additional processing modes. Colours are nicely balanced, with a natural tone to skin and grassy fields alike.

Switching to Freeview HD, the Samsung F7000's picture is clean, detailed and sharp, with a real emphasis on the edges. The colours are punchy and dramatic – a bit like the company's smartphone screens – but not as natural and subtly shaded as we’d like. It’s a minor gripe, however, and doesn’t change the fact that this Samsung is an excellent TV.

The UE40F7000 is an active 3D TV, with a depth to the picture that’s more dramatic and exciting than on passive sets. There’s no crosstalk or flickering, and we’re pleased with the level of detail on offer. Fast motion scenes are also dealt with well, the picture remaining stable as we watched the stormy seas in Life of Pi 3D.

Active-shutter 3D glasses do tend to be more demanding on the eye, however, so you may get tired after a while. The two pairs of glasses included are light in weight, but not the most comfortable that we’ve tried.

We’re used to being disappointed by the sound that flat-screen TVs make, but here we’re pleasantly surprised. The sound is fairly substantial, with punch to explosions, and clear dialogue. We’d still recommend investing in a soundbar or an amplifier and some speakers, but what you get out of the box is something that we could live with.

The Samsung UE40F7000 is an impressive TV. We really like its design, the smart interface, and its top-notch picture performance.

There is some fierce competition at this most popular of screen sizes, but for now Samsung has another five-star set on its hands.