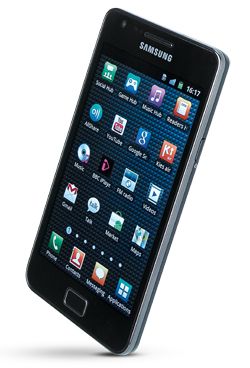 Samsung Galaxy S2 review: our Best Smartphone, Awards 2011. A fine phone and worthy champion – but the new smartphones have upped the ante.

The Samsung Galaxy S2 is our Award-winning smartphone for 2011. We were big fans of the original Galaxy S, and this Galaxy S2 summer update was a welcome evolution that brought small but brilliant tweaks across the board.

But that was then, this is now, and a host of new Android handsets, and the iPhone 4S, are vying for the crown.

The Samsung Galaxy S2 remains a slip of a phone. It’s featherweight and wafer thin – almost to its detriment, lacking gravitas for all its portability. It has a normal array of connections, but also includes a microUSB that cleverly doubles as an HDMI output (with a £25 cable).

The 4.3in screen is striking. It’s a typical 800 x 480 resolution, but it looks good, which Samsung will attribute to its Super AMOLED Plus display.

There’s plenty of room on that customisable Android home screen for apps and widgets, and moving around the interface and arranging your icons is as easy as any other Android 2.3 phone.

Samsung focuses on grouped ‘hubs’ of content, such as Social, Readers, Music and Game areas. The increasingly formidable Android Market is here, too.

Connect it to your PC and Samsung’s new Kies software will load, letting you wirelessly sync music, video, contacts and more. It seemed a little slow to us, but it is new to market as we write.

While we’re talking wireless, you get DLNA support, too.

Internet browsing is fast – the Galaxy S II has a dual-core 1.2GHz chip – and the screen’s size comes in to its own.

It isn’t perfect compared with some new rivals, though: the screen has a strange tint at times, and scrolling speed through web pages can be erratic, speed-wise.

Another foible is the phone’s insistence that it can’t handle WAV files. It can, but does so by putting them in the file explorer rather than the music player. This aside – and with all the usual formats supported – the music and video performance is good.

There’s plenty of space to James Blake’s vocals and more upbeat tracks sound exciting, with only a lack of punch and precision compared with the iPhone 4S.

The Samsung Galaxy S2 remains a formidable proposition but the next wave of smartphones has arrived – and it’s providing some tough competition, not least from Samsung's own Galaxy Nexus.