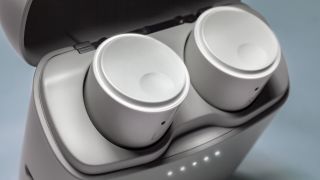 Year in and year out, the league of headphones is one of the closest-fought What Hi-Fi? Awards categories. It's often the one in which we receive the most official nominations, and the quality of competition is reliably high between a great number of brands.

It's also understandably a reader favourite. After all, what's more exciting than unpacking a brand new set of cans (or buds), placing them over (or into) your shell-likes and being transported to a sonic land far, far away?

So friends: we've made good on the task of judgement. We've toiled, argued, compared notes, swapped back and forth, replaced the tips and recharged scores of wired, wireless, true wireless, in-ear, on-ear, portable and home-use headphones to finalise our list of the eleven best models your money can buy today. Yes, there's a repeat winner or two in the mix. But there are also several new pairs that defied preconceptions to get the nod.

Which headphones should you spend your money on in 2019? We thought you'd never ask. Let's go...

Four wired on-ears: three for home, one for the road

Kicking things off with our best portable on-ear headphones Award winner, the AKG Y50 headphones will set you back a relatively lowly £69, but their sound – and heritage – is anything but. This is the Y50's sixth year of scooping up an award from us. Yes, you read that correctly. We didn't plan for this... they're just that good.

Another familiar face gets our shout for best home on-ears under £100. The Grado SR80e open-backed, on-ear headphones picked up an award in 2018 and, for under £100, the smart money's still on Grado.

Moving up a price-point, there will doubtless come a time when the Grado SR325e (£269, pictured above) headphones will have to make way for newer, better competition. Our 2018 sub-£400 award-winners can be content in the knowledge that now is not that time. Despite testing many rivals (including Beyerdynamic's excellent Avanthe), they remain the go-to home under £400.

Will your budget stretch beyond when it comes to wired on-ears for home use? Congratulations, we like your style. We also like the Beyerdynamic Amiron – in fact, we're so enamoured by them, we handed them the Award for this category. Again.

Want the best wired in-ears one crisp £50 note can buy? Meet the SoundMagic E11C (pictured above). One of the most surprising success stories of recent years, SoundMagic rose from obscurity in 2005 to multi-Award-winning success with its budget in-ear headphone range. The excellent E11Cs have the standard 3.5mm headphone cable connection, so you’ll need that dreaded dongle for connecting to USB-C or Apple Lightning ports.

Up one rung to the competitive and heavily-saturated £50-£100 wired in-ear category and the victory is all Klipsch's, its T5M Wired narrowly pipping the five-star Beyerdynamic Soul Byrd to the post. Yes, you've every right to raise an eyebrow. (Now go and listen to the Klipsches. Really).

'What about the best in-ears for over £100 though?' we hear you cry! We'll come straight to the point: the Shure SE425 in-ears are still unbeaten. We said it in 2018 and we're saying it again, these really are the finest in-ears we’ve ever heard at this price.

A quartet of the best wireless options

These days, the term "wireless headphones" encompasses three distinct design variants. Firstly, there are Bluetooth cans which have done away with that wire attaching them to a device. Easy. Then, there are two types of in-ears: those models which (while wireless in the same way that the aforementioned cans are wireless) have held on to the wire attaching the two buds together, and their 'true' wireless counterparts – ie. those without it.

This huge category contained all three models, but we sub-divided it into in-ears and on-ears. What we're saying is, we deliberately pipped wireless in-ears against their true-wireless competition at the price. When the winners emerged, they were all true wireless.

Cambridge Audio's inaugural 2019 true wireless earbuds (pictured top) beat a plethora of contemporaneous releases in their category. Cambridge Audio named them Melomania, which literally means ‘crazy about music’ – and crazily good for £118 is exactly what they are.

If you've got a score over £200 burning a hole in your pocket though, the Sony WF-1000XM3s (pictured above) are the best wireless in-ears your money will buy, setting a new benchmark for effective active noise-cancelling alongside a real sense of musicality.

Want to know our pick of the best wireless on-ear headphones for under £250 in 2019? That'd be the AKG N60NC Wireless (pictured above) again – not surprising considering their great noise cancellation, comfy build, solid bass and clear midrange and treble frequencies.

If you're able to spend just a little more for wireless cans, it's back to the name Sony for the WH-1000XM3. They remain one of the most comfortable noise-cancellers and insightful performers at their price. As far as we're concerned, the Sony WH-1000XM3s are Jack of all trades, master of all.

So, which pair will win the What Hi-Fi? Product of the Year 2019? You'll have to keep a keen eye on whathifi.com on the evening of Tuesday 5th November, which is when we're hosting the annual Awards ceremony this year.

And let's not forget the What Hi-Fi? Awards 2019 Readers' Award, because with both Cambridge Audio Melomania 1 and Sony WF-1000XM3 amongst the 11 products shortlisted, one of them could well be running away with another trophy for the cabinet.