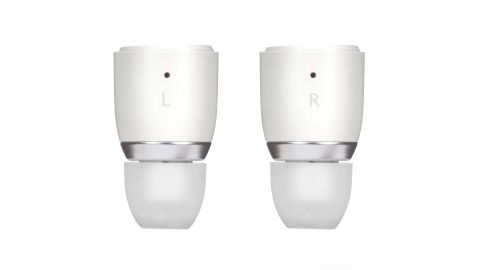 The Cambridge Audio Melomania 1s deliver one of the most detailed sound performances we’ve heard at this price point. Just make sure they fit well

There’s no doubt Cambridge Audio is passionate about music – the company’s website even urges you not to accept the ‘crime’ of ‘bad sound experiences’. So, it’s no surprise to discover that its inaugural true wireless earbuds are named Melomania – literally meaning ‘crazy about music’. They also happen to be among the best wireless headphones of the in-ear variety we've heard at the money.

Cambridge Audio’s focus has long been on sonic deliverance over appearance, and so functional is perhaps the best that can be said about the Melomania 1s’ aesthetic. With a ‘stone’ grey hue, they look and feel slightly medical, though they are also available in a more fetching black finish, with the only visual flourishes being a pulsating light which shines around the edge of each earpiece.

The little in-ears snap reassuringly into their charging case with the aid of magnets, while another magnet keeps the case lid shut. The case is only marginally bigger than a box of dental floss – ideal for slipping into your pocket – and features a horizontal set of five lights to indicate the battery charge level.

With nine hours battery life from the buds themselves, plus four additional charges from the case, that means an impressive 45 hours of continuous use from this little set-up.

The Melomania 1s are longer than some in-ears. They come with four tips: three silicone, one memory foam, and while some of the team found a perfectly easy fit, others needed some slight twisting and replacement to get a secure seal. As with all true wireless in-ears, the size and shape of your ear will dictate how much the the headphones protrude.

Inside each unit, there’s a 5.8mm graphene driver, a triple-core processor (including a Qualcomm subsystem to support both AAC and aptX audio codecs) a noise-cancelling mic for clearer calls or chatting to Siri/Google Assistant, plus Bluetooth 5.0. An IPX5 rating means they’re water and sweat-resistant too.

The Melomania 1 IEMs are truly wireless, so there are no wires anywhere except the little supplied micro USB cable to connect the charging case to a power source – which you won’t often need. Also, there’s just one button on each earpiece (designed to look like the Cambridge Audio logo), occupying its entire surface.

You will need to remember a code needed to skip a track (two quick presses on the right unit) go back a track (two quick presses on the left) increase the volume (hold the right button down) and summon your voice assistant (two slow presses on either) to name but a few. If this sounds complicated, it’s really not. Cambridge Audio even provides a credit card-sized cheat sheet, listing all the button-pressing choreography – so you can always keep it to hand until you’ve nailed your moves.

Because that single, central button occupies the entire top surface of each unit, it’s easy to press it by mistake when trying to push the buds into your ear, but the worst that’ll happen is you’ll accidentally pause a track or alter the volume.

We find the claimed 30m Bluetooth 5.0 connection and pairing between the two monitors extremely reliable, even when we left our iPhone XS Max streaming tunes on the table and walked outside wearing them.

Cambridge Audio has taken great pains to emphasise its focus here: a quality sound experience. We stream Lewis Capaldi’s Grace at CD quality on Qobuz, and our head is immediately filled with a remarkable breadth of sound for a set of wireless earbuds.

Capaldi’s vocal is detailed, but there’s a playful ease to the dynamics here. We hear his intake of breath and the impending break in his voice as he belts out the chorus, without ever losing the spaces between the chords on the piano, the strum of the guitar or the crash of drums in the mix.

Everything is present, everything has space, everything works harmoniously, and with room to offer its sonic service to the whole. Similarly, when the music stops, it stops resolutely and with more precision than you'd expect. We feel immersed in sound too – even the background noise of the Underground train we’re on fails to intrude on the experience.

We stream Rod Stewart’s This from his 1995 album, A Spanner In The Works, and the subtle backing vocals come through on the track – voices which are imperceptible through many other wireless earbuds at this price.

The Melomania 1s offer insight to the point that Stewart’s struggles with singing during the recording of this album are actually audible and we can hear when he falters slightly. Slight deviances in pitch, where straining his voice to reach high notes, are also there. The Melomania 1s are so honest they can’t lie.

We switch to David Bowie’s Moss Garden instrumental on Qobuz at CD quality. The aeroplane that streaks across the Japanese soundscape moves stealthily from our left ear to our right, grazing our brain’s temporal lobe en route. Brian Eno’s Yamaha synthesizer is open and well controlled, with just enough weight through the bass register.

Bowie’s meandering plucks of his koto are central, precise and soar up through a clean, delicate treble. When Bowie’s birds chirp, we know where they are in his painted garden, such is the accuracy of the soundstage here.

These aren’t noise cancellers, so they cannot compete with the isolation offered by Sony’s WF-1000Xs, for example. There’s also no dedicated app for the Melomania 1s and while this makes everything refreshingly simple when pairing, there is no scope for EQ alteration.

If an unadulterated sound is your sole concern, these buds are hard to beat in their price category - just make sure you've got a decent fit. This minor qualm might be down to the length of the earpiece itself, but more likely they could be resolved by offering more buds in a greater range of sizes.

With the Melomania 1s, Cambridge Audio has made good on its promise to save us from bad sound experiences. These budget-conscious in-ears offer a cohesive, expansive and rhythmically driven sound, but also an intuitive, playful soundstage that few wireless earbuds can achieve at the price.