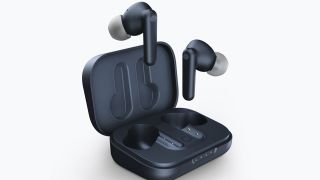 Swedish lifestyle audio brand Urbanista has just announced London, a pair of noise- cancelling wireless earbuds, complete with wireless charging case. And while they look strikingly similar to a well-known and hugely popular Apple product, they're actually a whole lot cheaper than the AirPods Pro.

As regular readers (and anyone interested in portable music) will know, the category of best wireless earbuds is a hotly contended one, but the AirPods Pros are among the pricier pairs, at £249 / $249 / AU$399.

Don't fancy forking out for those but still want the look – and apparently, the features? The Urbanista London include noise-cancelling tech just like the AirPods Pro, but here's the thing: they're a whopping $100 / £120 cheaper. That pricing also makes them some of the most affordable noise-cancelling earbuds we've seen with a true wireless design.

According to Urbanista, battery life comes in at 25 hours in total – that's five hours from the earbuds themselves, and a further four charges from the case, which can be charged wirelessly on a Qi-certified mat (or via USB-C) making them very similar to the AirPods Pro in terms of stamina.

An IPX4 waterproof rating means the London earbuds should withstand a little sweat or rain, and the active noise cancelling (ANC) feature promises to completely switch off the outside world 'at the press of a button' – so it's unclear whether the 'stem squeeze' function (as seen on the AirPods Pro) is available here.

The Urbanista London earbuds also have a built-in ear detection technology that is programmed to pause when the sensors detect that you've removed one bud from your ear. The music will stop playing completely when both earbuds are removed.

Whether these in-ears stand up under scrutiny when compared to the AirPods Pro – or indeed, What Hi-Fi? Award winners like the Cambridge Audio Melomania 1 and Sony WF-1000XM3 – for features, user experience and sound quality remains to be seen, but for that money, the tech onboard here is intriguing...