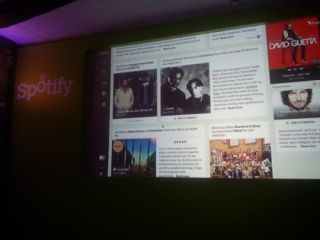 Spotify has revealed a new look, new features and details on subscribers and artist payments at a press conference in New York.

The streaming music service also revealed the addition of the full Metallica back catalogue, a band which once sued Napster, the founders of which are now key investors in Spotify.

Daniel Ek, Spotify CEO, revealed that the service now hosts one million playlists from five million paying subscribers, one million of which are now based in the US, where Spotify launched earlier this year.

In an attempt to answer critics on Spotify payments to artists, Ek also revealed the company has paid out over half a billion dollars to artists since its inception.

(New Spotify in Beta mode pictured, minus a few of the new features)

Following artists will also mean that you get updates when new music from them lands on Spotify.

There's also a new track preview feature, which means your currently playing music can be interrupted briefly as you play other tracks before continuing where you left off when you stop.

Music discovery and sharing were once again the key features that Spotify is hoping to push in its self-proclaimed effort to get "all the music in the world" available to stream on Spotify.

Clearly Lars Ulrich, the founder of Metallica, who famously sued file-sharing site Napster and have been seen as the antithesis of streaming services, is now convinced.