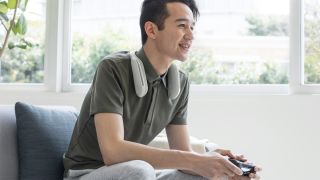 Sony has unleashed its wearable neck speaker to the North American market, designed to put you at the centre of the action wherever you go.

The Sony SRS-WS1 is worn on the shoulders and gives the user both the sound and the vibrations to make them feel like they’re in the game, film or concert that they’re watching on TV.

The 335g device is fitted with a pair of 30mm full-range drivers and a passive vibration board which enhances the bass tones. Placed inside a speaker slot, this array is designed to create a feel of sound which surrounds the wearer and there are ducts placed on the lower side to reduce unwanted resonance.

Sony SRS-WS1 wearable speaker $249 at Sony Store
Save $50 when you order Sony's immersive speaker direct from Sony before 1st December 2019. Not one we've tested yet but a fascinating device which could bring a fantastic sense of immersion to TV audio.View Deal

The intensity of the vibrations can be set to three different levels according to just how big you want those explosions and shots to feel and how clean you want the audio too.

As well as pure immersion, the Sony SRS-WS1 offers an interesting solution to keeping the noise down when enjoying your favourite on-screen action. The audio is both localised and highly effective at low volumes, according to Sony, which should come as some relief to your housemates and your neighbours.

Sony's wearable neck speaker comes with a wireless transmitter which connects to your TV with either optical or audio cables, also included in the box along with a charge station. The sound is sent over a 2.4GHz RF wireless standard with a promised low latency. You can also hard wire it to your smartphone.

It's possible to connect two of the speakers to a single transmitter simultaneously. Each will give you a 7-hour battery life with a 3-hour charge time.

The Sony SRS-WS1 has proved popular enough in other markets for Sony to think it may well be a success in North America too. Definitely one to look out for.