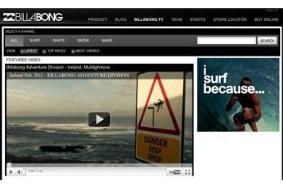 Aimed at snow and water sports as well as fashion enthusiasts, Billabong.tv will feature a mix of shows including adrenaline charged sports events, behind-the-scenes interviews with the world's leading board sport athletes and fashion shoots with the team from Billabong girls.

Scott Wallace, Billabong's vice president of new media, says: "Billabong.tv allows viewers to watch the world's best surfers tackling the treacherous Teahupoo in Tahiti, crusie through downtown LA with skateboard icon Bucky Lasek, or chill out with the Billabong bikini models as they go on location in Hawaii."