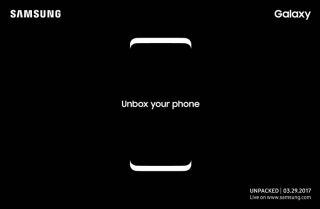 Samsung has announced the launch date for the Galaxy S8. It will officially unveil its latest flagship phone on 29th March.

At the Mobile World Congress trade show in Barcelona, Samsung also revealed that its Galaxy smartphones will come with headphones tuned by AKG, as part of a move to bring AKG audio tech to its Galaxy range of smartphones and tablets. AKG is owned by Harman, which Samsung bought last year for $8bn.

Instead of headphones, Samsung's Galaxy Tab S3 tablet features quad stereo speakers tuned by AKG. They adjust the sound automatically depending on whether you're holding the tablet in landscape or portrait orientation.

The Galaxy S8 is rumoured to come in two sizes, with a curved edge-to-edge screen, better camera and rear fingerprint scanner. It is also believed to feature its own personal voice-controlled assistant called Bixby.