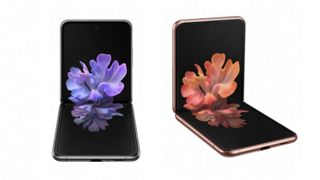 The new 5G version of the clamshell phone opens up to reveal a 6.7in Dynamic AMOLED display protected by a mixture of glass and plastic, which Samsung calls 'ultra thin glass'. There's also a tiny 1.1in Super AMOLED outer screen for notifications.

Under the hood, the Galaxy Z Flip 5G is the first in the Galaxy range to boast a Qualcomm Snapdragon 865+ processor with 5G modem (the standard Z Flip has the 855+ chip), and promises glitch-free gaming and video on the go.

The Galaxy Z Flip 5G also comes with a couple of notable software improvements, including YouTube with Flex Mode, which allows users to stream video on the top half of the screen while reading live comments on the bottom half.

Camera-wise, the Galaxy Z Flip 5G mimics the standard Z Flip with a 12MP wide and 12MP ultra-wide lens on the front, plus a 10MP selfie camera inside. The only major difference is a software update that should make it easier to capture low- and high-angle shots.

Are you ready to flip out? You won't have to wait long. The Samsung Galaxy Z Flip 5G is due out on 7th August in the US, priced $1,449.99 – around $80 more than the standard Z Flip. To sweeten the deal, Samsung is throwing in four free months of YouTube Premium.