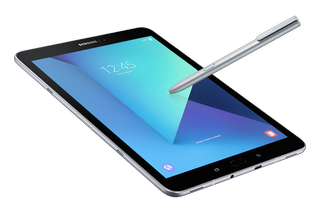 Samsung's focus for MWC2017 hasn't been smartphones, but the launch of a couple of new premium tablets: its third generation Galaxy Tab S3 and the brand new Galaxy Book.

Available with a 9.7in Super AMOLED screen, the Tab S3 is the first Samsung tablet to feature quad-stereo speakers tuned by AKG. Samsung acquired AKG's parent company, Harman, back in 2016 and this would appear to be the first fruits of that venture.

The Samsung Galaxy Book (pictured above) is available with either a 10.6in or 12in Super AMOLED screen and is Samsung's first Window's tablet. It uses the Windows 10 operating system so you've got the complete Microsoft Office experience at your disposal.

Both new tablets support 4K HDR video and use Samsung Flow for biometric authentication so you can log in and tether compatible devices to transfer data between them.

The tablets also use a revised version of the S Pen stylus which now has a smaller 0.7mm tip and increased pressure sensitivity.

Pictures come courtesy of a 13MP camera on the rear of both and a 5MP front-facing camera, while there's also support for expandable storage and fast-charging.

Battery life is 12hrs for video playback on the Tab S3 and 10.5hrs on the 12in Galaxy Book.

The Samsung Galaxy Tab S3 is available to pre-order from 17th March and goes on sale in the UK on 31st March. Availability of the Book and pricing for both tablets are still to be confirmed.