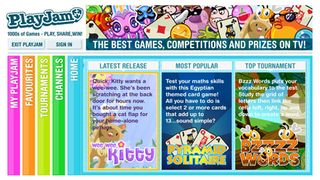 Samsung continues to expand its range of Smart TV apps with the addition of games network PlayJam.

At the click of a button on the TV remote, PlayJam's games will be streamed directly to the television in high definition.

In addition, PlayJam's Social TV games platform enables social networking between gamers through chat and messaging within the network.

Jasper Smith, PlayJam's CEO, says: "Within a few years we believe that TV games will surpass mobile gaming in terms of revenue and stickiness."