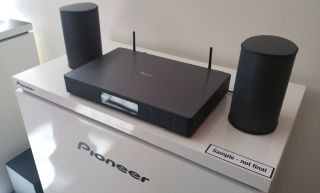 Not everyone was ready to make a song-and-dance about forthcoming products at High End 2016, and much like Q Acoustics was teasing rather than launching its new Concept 500 high-end speakers, Pioneer was keeping a couple of new arrivals slightly under wraps.

The new products should be with us later this year, though, and are a multi-room, multi-source all-in-one system, currently known as the FS system, and a more familiar Pioneer streamer, complete with amplifier and CD player.

The Pioneer FS system is an AV all-in-one with a Blu-ray player and HDMI switching, and comes with two compact speakers, plus support for a sub and even an extra set of speakers. As well as HDMI inputs, the system will take care of wireless music using Google Cast, Pioneer having been announced as a new partner for Google's wireless streaming tech earlier this year.

The FS system promises to deliver music to multiple rooms, presumably with other Pioneer wireless products as well as other Google Cast devices (LG and Sony also support the wireless technology), and will use Pioneer’s new ‘Fire Connect’ interface and control app. Due this summer, it will go on sale for around €1000.

Also incoming is what looks like a more familiar streamer, albeit one that also includes a CD deck. The Pioneer NC-50DB, which is expected to cost around £750, will offer amplification and wireless streaming as well as CD playback, and follows on from the launch of the Pioneer A-50DA and A-70DA amplifiers earlier this year.

If the new feature-packed streamer is anything like the award-winning Pioneer N-50A, then it could be a very interesting proposition indeed. We'll have to wait for the full details for now.