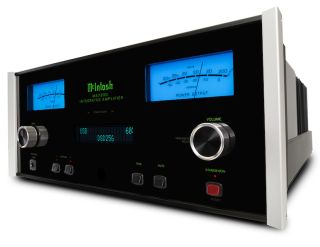 McIntosh is covering all bases by furnishing its new 200 watts-per-channel MA7200 integrated amplifier with 14 inputs.

Eight of these are analogue connections: five unbalanced, one balanced, plus MC and MM phono inputs for turntables. The remaining six are digital, and include a pair of coaxial and optical inputs, a proprietary MCT input for use with McIntosh SACD/CD transports and, finally, a USB input. The latter supports PCM files up to 32-bit/384kHz, DSD256 and DXD 384kHz.

The digital inputs are housed in McIntosh’s DA1 Digital Audio Module, which features a 32-bit DAC used in Quad Balanced mode. In fact, spec-wise, the MA7200 isn't far off McIntosh's most powerful integrated amplifier ever.

Doing its best to futureproof the MA7200, McIntosh has also made the DAC module upgradeable, so it can be replaced should that be desirable.

McIntosh says the MA7200 features many design improvements over the last generation of McIntosh integrated amplifiers. Upgrades include more powerful control microprocessors, some of the latest audio-grade circuit components and the addition of McIntosh’s latest Headphone Crossfeed Director (HXD) technology.

The MAC7200 receiver, meanwhile, builds on the MA7200 integrated amplifier by adding an integrated AM/FM tuner to proceedings. It features dedicated buttons for presets (there are 20 for each radio band) and tuning, and the FM tuner supports Radio Data System (RDS), allowing radio station information to be displayed.

McIntosh's most powerful integrated amp ever

The world according to McIntosh