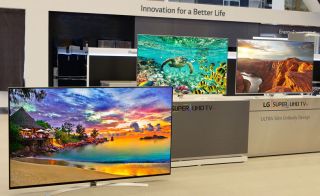 CES may not yet have opened its doors for 2016, but the news on new products is already trickling out.

Promising to be slimmer than ever and coming with support for 4K HDR content, the new sets will also be joined by LG's first production 8K TV - a 98-inch 8K Super UHD TV, no less.

Slightly more realistic for most of us might be the new 4K models. LG is calling these sets 'Super UHD', somewhat confusingly following the launch of Samsung's SUHD TVs at last year's CES.

Samsung would never quite confirm what the 'S' in SUHD stood for but at least LG is adamant that it's Super as far as its new TVs are concerned.

Expect these sets to be joined by new LG OLED models at CES, with LG claiming to be focused on IPS and OLED TVs for 2016.