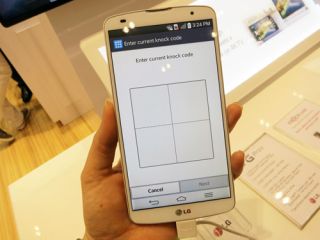 LG has announced that its latest screen unlocking feature, Knock Code, will be available as an upgrade for the LG G2 and LG G Flex.

Knock Code was first demonstrated on the LG G Pro 2 at Mobile World Congress earlier this year and will be available as a free update on existing handsets in the coming weeks.

The move improves LG's previous 'Knock On' feature, which users could 'wake' their phone by tapping the screen and then enter a password or pin.

Knock Code combines these two steps into one and users will be able to assign an unlock pattern of between two and eight taps, within four quadrants on the screen.

LG claims there are more than 80,000 possible combinations – best not to forget your pattern, then.