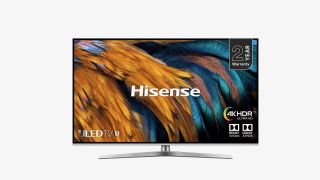 Hisense has taken the wraps off its new TV range at tech extravaganza CES. It's launching two new ULED sets, alongside a 4K HDR LED TV, all to go on sale between April and June.

Let's start with the ULED models. The flagship U8QFTUK set is kitted out with both Dolby Atmos and Dolby Vision, so it ticks both the audio and visual boxes. It also features full array local dimming for greater precision in contrast, plus quantum dot colour and a JBL-derived audio system.

Little is known about the U7QFTUK ULED, meanwhile, but it will likely be a slightly lower-specced (and therefore more affordable) quantum dot model.

(Hisense has said the model numbers are still subject to change. It also hasn't furnished us with an image of either, hence the picture of an older model at the top of this story.)

The 4K HDR LED model is called the A7500FTUK. It too comes with Dolby Vision and Dolby Atmos, plus wide colour gamut and ultra motion technologies. It's also compatible with Amazon's Alexa personal assistant, so you can control it via voice control.

Hisense has become more of a presence in the UK TV market of late. As well as producing some great bargain TVs, it has also raised its profile by sponsoring the Euro 2016 and World Cup 2018 football tournaments. And with it also sponsoring Euro 2020 this summer, expect to see a lot more of the brand this year.

• Should you buy a Hisense TV?