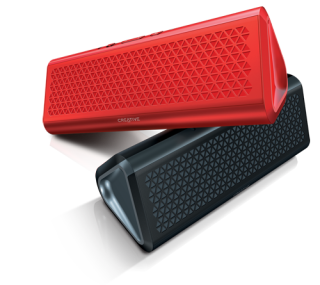 Creative is adding to the wireless speakers market with the new Airwave and Airwave HD speakers.

The Creative Airwave HD features a "Super Charged" amplifier that promises louder sound, aptX Bluetooth audio and AAC codec support for higher quality streaming, and up to seven hours of battery life. You can also connect two different devices to the Airwave HD at the same time.

The less powerful Creative Airwave speaker doesn't have the Super Charged amplifier on board, but it does support aptX Bluetooth, and its battery lasts longer at 12 hours. Both speakers are compatible with Apple and Android devices.

The portable, prism-shaped speakers are available in a variety of bright and bold colours: the Airwave HD is available in red and black, while the Airwave has a larger collection of blue, pink, green and grey finishes.

The Airwave HD costs £130, while the Airwave is yours for £80 – both speakers are on sale now.

It's Bluetooth only, and can be calibrated to your room's environment using the Creative Centra app, available for Android and iOS.

It's a modular system as well, meaning you can add other D5xm units, smaller D3xm and the DSxm subwoofer (both cost £160) to create up to a 3.1 speaker system.

We were fans of the Creative ZiiSound D5x Bluetooth speaker, so we look forward to getting these new Creative speakers in for review very soon.