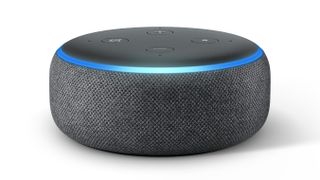 Has Amazon lost its mind? The online retailer is offering the 3rd Generation Amazon Echo Dot for just 99 cents when you subscribe to Amazon Music Unlimited.

That's a $49 saving over its normal price or a massive 85% discount. However you slice it, this is a doozy of a deal.

The final amount comes to a grand total of just $8.98 for Amazon Prime customers. If you don't have Prime it'll be $10.98. And yes, both prices include the $50 Echo Dot 3rd Gen speaker.

Amazon Echo Dot 3rd Generation $0.99 at Amazon
This crazy Amazon deal gets you a $50 smart speaker for just 99 cents when you sign up for one month of Amazon Music Unlimited ($9.99 regular price/$7.99 for Prime members). The five-star Echo Dot 3rd Generation is a great all-round performer and for less than a buck... you'd be mad not to get one.View Deal

This is because Amazon Music Unlimited normally costs $7.99 per month for Prime members or $9.99 for those who aren't. After your first month, the subscription will auto-renew unless you cancel it – which you can do at any time.

We found this third iteration of the Echo Dot to be a five-star performer at its regular price of $50, offering a clear, solid sound and improved Alexa capabilities. And let's face it, at $0.99 it's an absolute steal...

The offer seems to be for new Music Unlimited subscribers only – although if you're a past subscriber (or you've previously done a trial), you might still be able to take advantage of it. Our research suggests that deal-savvy users who've done trial memberships in the past have been able to snap up this Echo Dot deal – and we'd suggest signing up on the desktop version of Amazon Music Unlimited.

Will we see more last-minute deals this Holiday? Probably. But how often does one see a $50 product listed for 99 cents?