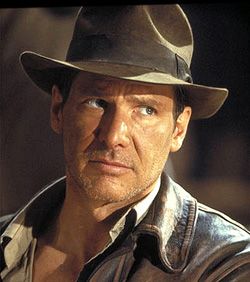 Paramount Distribution and LucasFilm announced the good news in the briefest of statements, promising "the highest possible high definition picture and audio presentation".

The Blu-ray box set will include documentaries, interviews, featurettes and "a few new surprises".

Thankfully, these should be good rather than bad surprises, after Steven Spielberg promised to leave all the crucial elements of the films intact.

Speaking at a 30th anniversary event for Raiders of the Lost Ark back in September, Spielberg said: "This is the best I think it’s ever looked.

"In preparation for the eventual release on Blu-ray we had to correct the print again and get the original negative out of the salt mines, and then we had to do the separations, and basically the files, which are just amazing, with all the technology of today, without changing any of the movie materially.

We haven’t removed anything, we haven’t added CGI, there’s no digital enhancements! It’s purely the movie some of you may remember from 1981."

You can watch a trailer for The Complete Indiana Jones Blu-ray Collection on YouTube, while it's already available to pre-order on Amazon in the US for $75.