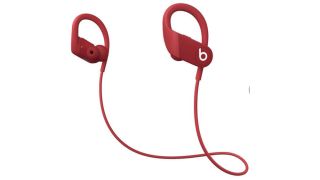 Apple's Powerbeats 4 have been spotted on sale at a Walmart in the US – even though Apple has yet to officially announce the new earphones.

@9to5mac @MacRumors did the new Beats Powerbeats drop without announcement? these were found in my local Walmart in Rochester NY. pic.twitter.com/oiqDD20dcBMarch 14, 2020

The spot confirms many of the specs we were expecting from the sporty in-ears. They're available in black, white and red, and have 15 hours of battery life.

While we don't have confirmation as yet, that 15-hour battery life is likely due to the inclusion of Apple's H1 chip. This is also found in the Powerbeats Pro headphones, and enables Hey Siri support and the ability for Siri to read out your messages.

AppleInsider has gone hands-on with the Powerbeats 4. It claims substantial battery gains, an improved design and a round cable in place of the old flat one.

There's still no word from Apple regarding the Powerbeats 4, but we'd imagine they must be planning to reveal them any day now. That being said, and with Apple closing all of its retail stores outside of China, it could be that the coronavirus pandemic is causing a delay.

We'll update you on availability in other countries along with full specs as soon as they're announced.