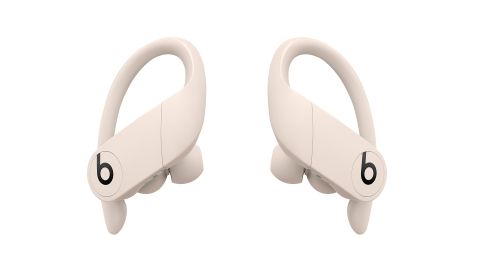 In many ways these are among the best in-ear wireless sports headphones available, but not for sound

The three things any music-listening athlete will look for in a pair of headphones are comfort, a secure fit and a long lasting battery life. With the boom in wireless technology in the past few years, you can add securely fitting ear hooks and not so much as a tendril of cable to that list.

The Beats Powerbeats Pros have all the ingredients, Beats having redesigned its existing, sports-focused Powerbeats into a set of truly wireless headphones for runners and gym-goers. The previous model’s cable, which dropped down from the earbuds and wrapped around the back of the neck, has completely disappeared.

In terms of their presentation, the Powerbeats Pros are unmistakably on-message with parent company Apple. They come in a swish, black charging case that’s a pleasure to open and close. It’s solid, smooth and, thanks to the magnetic catch, it won’t accidentally open up and let your earbuds spill out.

As we're now very much accustomed to, the case doubles as a battery charger and the headphones themselves slot magnetically into their electrical contacts. When full, the Powerbeats Pros manage up to nine hours before requiring another charge – enough to last through Iron Man training. The box itself stores almost two further rounds of charge, giving you a possible 24 hours before you have to plug in the included USB-A-to-Lightning cable and return to an external power source.

The Powerbeats Pros’ case is much larger than that of the pocket-sized Apple AirPods Pro and is too chunky to fit comfortably into your jeans or your jacket. However, as the Powerbeats Pros are designed primarily for use during exercise, you’ll probably put that case in your sports bag anyway.

The Powerbeat Pros are works of secure-fit, rubber-clad magnificence available in a choice of black, navy, ivory and moss (green). They sit nice and tight to the side of your head. The adjustable, bendable ear hooks offer all the give and grip you need and it makes them a dream to wear.

During our workouts, they don’t move from their snug-fitting position. Thanks to their sweat and water-resistant design, they’re as comfortable from our first stride to our last; never hot, never slipping. They come with four different sized ear tips, but the pre-fitted pair fits us best.

Of course, there’s more to the Powerbeats Pro than just flexibility and comfort. There’s control too in the shape of a volume rocker switch. The Beats symbol itself is also a button. You can use it to take calls and play/pause music with a single tap, while a double tap skips forward a track and a triple tap goes back. You can also fast-forward and rewind by holding on to the last of these taps.

Best of all, the controls are duplicated on each earpiece, so there’s no need to remember which side does what – that could make a difference when you’re on the treadmill and every little hesitation counts.

The other piece of built-in tech that works wonders is a sensor that detects whether or not you’re wearing the headphones. Take one of them off for a moment, and they’ll send a message to your device to stop the music. Put them back on and playback will begin again. Every now and then the sensors get confused, but it’s a feature we really enjoy. You can also override the system by pressing the Beats button should you wish to keep listening with just one earbud.

Naturally, the wireless tech that connects the Powerbeats Pro to your music device is Bluetooth and it’s Apple’s H1 chip that’s in charge. In terms of consistency of connection and ease of pairing, it really is Bluetooth at its best. There are no dropouts of sound throughout our testing with the playback from each ear consistent at all times.

There’s no awkward combination of buttons for Bluetooth set-up either. Instead pairing mode is activated any time you open the Powerbeats box with the headphones docked inside. Bring the box near to any iOS device and it kicks in automatically – it isn’t much harder with Android. Once paired with one iOS device, you’ll find they’re automatically registered on all the others you own as well. Should you open the box near any of your iOS devices from thereon in, you get a graphic display of how much battery power you have left.

Lastly, the Powerbeats Pros come with Siri voice assistant support, which will make phone calls, look up information and perform other tasks. It’s not something we find particularly useful during our run, but it’s certainly useful at other times.

Besides, for most of the core music functions, the remote controls on the Powerbeats themselves are excellent in their own right, but we are impressed by how well tuned the microphone is into picking up the Siri wake command.

Beats has a history of producing bass-heavy headphones and there’s no change in form here. When listening to lower quality streaming services, though, that tonal bias is perfectly acceptable.

At normal listening volume, the presentation is smooth and clear. It’s only when we turn the volume up that it becomes a touch hard and aggressive. There’s decent detail too, with emotion behind the vocals and resonance on every guitar strum.

But these are headphones to exercise with and it’s important to give them the chance to do what they were made for. So, we pull on our trainers, fire up a Spotify Running Hits playlist and hit the pavements.

Tiesto’s remix of Obsessed by Dynoro and Ina Wroldsen kicks in, and while the track usually has enough drive to make us run through walls – it reveals everything that’s not right with these headphones.

A lack of dynamic range in the sound makes the opening samples of a runner’s feet pounding the pavement sound like a weak pitter-patter. They’re not the heart thumps they’re supposed to be, and they don’t demand attention. When the thundering bass kicks in, we’re astonished at how soft and inaccurate it sounds in comparison to rivals, such as the Award-winning Sony WF-1000XM3s.

There’s little energy or agility to the Powerbeats Pros. Obsessed becomes just a measure of another four minutes of running and not the shot of adrenaline we need to pull us through the next mile.

We try again with Better When You’re Gone by David Guetta, which the Sonys recreate with excellent balance and timing. The big synth, which usually squeezes the last ounce of strength from our muscles, becomes a messy noise through the Beats. When the tune breaks, the lone guitar misses all poignance against an all-but-quiet background.

It’s a feeling of real disappointment. Even the bass, where we expect these headphones to excel, is missing weight, authority and the punch we’d hoped for.

We admire the Powerbeats Pro headphones for their build, their fit and their superb features. Thanks to the Apple H1 Bluetooth chip technology, they’re wonderfully easy to set up and use, and they’re virtually glitch-free in their delivery of wireless audio.

But their musical performance brings them down. While not chronically bassy and replete with detail, they just don’t have the liveliness to keep us interested even in tracks we know and love.

In terms of practicality, the Powerbeats Pros are an excellent set of headphones, and that makes it all the more disappointing that they’re so let down for sound. They may have the battery life and build to last 26 miles, but if we had to get ourselves through a marathon, we’d rather be wearing something else.