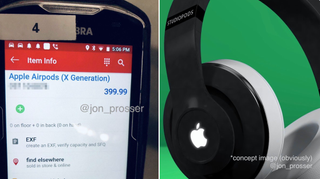 Apple's long-awaited over-ear headphones have been gaining traction for a while now, with analyst Ming-Chi Kuo suggesting a release in the first half of 2020 and a rumoured Apple event on 31st March slated as a potential unveiling party.

So, what's the latest in the 'another day, another rumour' saga? Well, as reported by 9to5Mac, YouTuber Jon Prosser has now shared an image (above) purportedly showing "Apple AirPods (Generation X)" headphones in Target’s inventory system, alongside his own concept image depicting Apple "StudioPods".

Crucially, the first image shows a $399.99 price tag, which could translate to around £350/€350 in the UK and Europe. In Apple’s current headphones line-up, the AirPods Pro tops the charts at $249/£249, so Apple could be looking to go higher-end with its new over-ears, taking aim at current class leaders such as the Sony WH-1000XM3 and Sennheiser Momentum 3 Wireless.

Prosser claims that "multiple Target employees have started reaching out" to him regarding the product listing. He adds that three different SKUs are listed for the product, meaning that Apple’s newest wireless headphones could be available in three colourways.

Naturally it's wise to treat this evidence with a certain dose of skepticism, but the price-point is likely to be more reliable (if the image proves genuine) than the product name; it's what the retail industry calls an inventory placeholder – meaning, as you might expect, the Apple over-ears probably won't be called "AirPods Generation X".