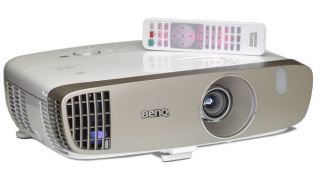 Who would have thought such a huge screen of entertainment could be so affordable? Thanks to the Amazon Summer Sale running until to the end of the bank holiday weekend, you can make a hefty saving on an already pretty affordable BenQ projector.

The BenQ W2000 is an HD projector capable of a 100-inch image, complete with integrated 20-watt stereo speakers, which means you have a ready-made home entertainment system in one box.

BenQ W2000 HD projector £579 at Amazon
You can save £220 on this four-star rated BenQ projector, which we described in our full review as "a great performer at the price, with superbly balanced colours and an immersive picture". And now it's even cheaper...View Deal

The W2000 is a Full HD single-chip DLP projector, and boasts BenQ’s CinematicColour technology, which aims to deliver the full Rec.709 colour standard for HD images.

It’s a compact, lightweight projector, neatly designed with gently curved edges and a mostly white plastic body, save for a flourish of gold along the front edge.

Connections are covered by two HDMI inputs, one each of composite and component video, RCA audio ins, a 3.5mm audio loop, a D-Sub PC port and an RS-232 port for control. There are also standard and mini USB ports but the latter is for servicing and the former for connecting up BenQ’s optional wireless HD kit for wireless streaming.

The projector is relatively short-throw, allowing for a picture of up to 100in from 2.5m away.

As we said in our review, the BenQ W2000 packs a real punch for its price, with a natural colour palette and wholly immersive picture that will be a treat for those wanting the big cinema experience on a budget. And now you can make a big saving.

Projector screens: everything you need to know