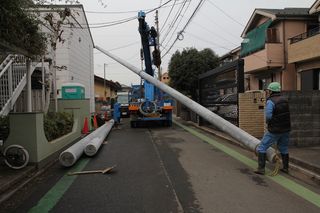 Some people will go to drastic lengths to get the best sound quality, paying extortionate amounts of money on speakers, amplifiers, and the best audio cables available. However, for 82-year-old Takeo Morita, who already has a $60,000 amplifier and theatre-quality speakers, this still was not enough.

According to the Wall Street Journal, the Japanese hi-fi enthusiast commissioned Izumi Denki Corp to install a personal electricity pylon in his garden so that he could avoid any electrical interference that comes from sharing a public line, which he believes interferes with the sound of his hi-fi because of the “noise” generated by neighbours’ personal devices.

This is not the first such occurrence, either. The company says that it has installed 40 similar poles across Japan since 2006.

According to Mr Morita, “electricity is like blood. If it is tainted, the whole body will get sick… no matter how expensive the audio equipment is, it will be no good if the blood is bad.” He now claims that his systems sounds much more transparent and the audio quality is notably improved. And who would argue with him?

If this DIY hi-fi project sounds a bit much, you could always build a shed out of your old vinyl records (no, we’re not sure why either)...